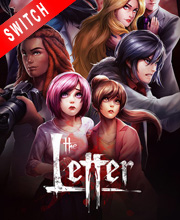 It's a digital key that allows you to download The Letter A Horror Visual Novel directly to Nintendo Switch directly from Nintendo eShop.

How can I find the best prices for The Letter A Horror Visual Novel on Nintendo Switch ?

The Letter is an accomplished visual novel: a riveting tale of curses, ghosts, and tragedy, drawing on the traditions of Asian horror cinema and built upon an inconceivably complex web of branching, intertwined narrative threads. That’s a hell of a feat for anyone, let alone as the first project for a young indie studio.

So, while the horror might be a little too much of a pastiche for its own good, there’s something very readable and enjoyable about The Letter. It’s not particularly deep, but it’s significantly better than amateur standard, the editing is clean, and you can just tell that this was a labor of love for the development team.

Zoom 1m 3m 1y All
Track product
NINTENDO CODE : This is a digital code for The Letter A Horror Visual Novel. Use the download code on the Nintendo eShop of your Console. Once connected to the Nintendo eShop, you can enter and redeem the Download Code. Read carefully the store description about any language and region restrictions.
Standard Edition
Compare Choose & Buy Download (803)