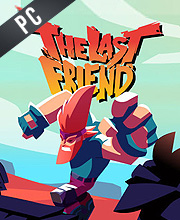 What is The Last Friend CD key?

It's a digital key that allows you to download The Last Friend directly to PC from the official Platforms.

How can I find the best prices for The Last Friend CD keys?

Allkeyshop.com compares the cheapest prices of The Last Friend on the digital downloads market to find the best sales and discount codes on trusted stores.

The Last Friend is a strategy video game that is developed by The Stonebot Studio and published by Ludus Games.

This is a game for all you dog lovers out there! Set in a post-apocalyptic future where a worldwide chemical warfare killed most of humankind. The few humans that survived the terrible ordeal made it a point to rebuild the world in a sustainable way, while the rest who were infected became mutants and are causing trouble across the globe.

You will step into the shoes of the main character who will be defending his mobile shelter as well as his precious friends which are his dogs. His location is a favorite target of mutants as dogs became the main source of food for them. You would have to set up traps, turrets or even use your bare hands to defend your friends.

Offering a fast-paced game mechanic that will give players the feel of the real essence of a Beat-’em-up game. You are able to customize your fighting style as well as use different skills and perks to spice it up. Each dog that you rescue has a unique trait that can use as a perk to improve your skills.

Also, a nostalgic feeling echoes throughout the game with its dynamic comic style and animations.

This is a game that dog lovers will surely enjoy playing!

Zoom 1m 3m 1y All
Track product
EPIC GAMES KEY : Region Free / Worldwide. Requires Epic Games Launcher App in order to play the game. You need to create a free account here in order to download The Last Friend from Epic Plateform . Read the description on the store page about any language or country restrictions.
STEAM CD KEY : Use the Steam Key Code on Steam Platform to download and play The Last Friend. You must login to your Steam Account or create one for free. Download the (Steam Client HERE). Then once you login, click Add a Game (located in the bottom Left corner) -> Activate a Product on Steam. There type in your CD Key and the game will be activated and added to your Steam account game library.
Ubisoft Connect CD KEY : Ubisoft Connect Digital Code to download and play The Last Friend. You need to install the (Ubisoft Connect Software HERE), then simply add the CD Key on Ubisoft Connect to download the game.
Standard Edition
Compare Choose & Buy Download (772)