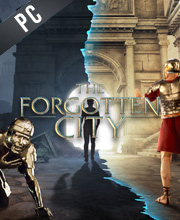 What is The Forgotten City CD key?

It's a digital key that allows you to download The Forgotten City directly to PC from the official Platforms.

How can I find the best prices for The Forgotten City CD keys?

Allkeyshop.com compares the cheapest prices of The Forgotten City on the digital downloads market to find the best sales and discount codes on trusted stores.

The Forgotten City is a story-driven adventure RPG, a fully realized standalone adaptation of the famous Skyrim mod of the same name, developed by the same people of Modern Storyteller studios. Travel 2000 years into the past to a Roman city buried deep underground, a small community thrives there nobody knows for sure how they all got here in the first place, but there is one thing everyone knows the golden rule a curse on the city if one person sins, everyone is punished they have kept the peace for a while now but you know that someone will break the law soon, you must figure out who it is before you share the same fate as everyone.

Zoom 1m 3m 1y All
Track product
EPIC GAMES KEY : Region Free / Worldwide. Requires Epic Games Launcher App in order to play the game. You need to create a free account here in order to download The Forgotten City from Epic Plateform . Read the description on the store page about any language or country restrictions.
GOG.COM CD KEY : You need to register on Gog.com, then use the GOG Key to download and activate your game to play The Forgotten City.
EUROPEAN STEAM GIFT : It’s a steam gift for Europe which requires an European IP address to activate and to play The Forgotten City on Steam. Read carefully the store description about region and language restrictions.
STEAM GIFT : A Steam gift is a one-time transfer you receive. You activate and install The Forgotten City to play on Steam, it is a non-refundable game that stays in your Steam games collection. Please read the store description about any language or region restrictions.
STEAM CD KEY : Use the Steam Key Code on Steam Platform to download and play The Forgotten City. You must login to your Steam Account or create one for free. Download the (Steam Client HERE). Then once you login, click Add a Game (located in the bottom Left corner) -> Activate a Product on Steam. There type in your CD Key and the game will be activated and added to your Steam account game library.
North America PC Win 10 / Xbox Key. Digital code for North America which allows you to play on both Xbox and Windows 10 PC in EUROPE. See below for more informations.
Collector Edition
Standard Edition
Compare Choose & Buy Download (759)