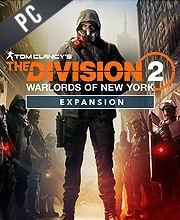 What is The Division 2 Warlords Of New York CD key?

It's a digital key that allows you to download The Division 2 Warlords Of New York directly to PC from the official Platforms.

How can I find the best prices for The Division 2 Warlords Of New York CD keys?

Allkeyshop.com compares the cheapest prices of The Division 2 Warlords Of New York on the digital downloads market to find the best sales and discount codes on trusted stores.

The Division 2 – Warlords of New York is an action, role-playing, third-person shooter video game that is developed by Massive Entertainment and published by Ubisoft. This is an expansion, so the base game The Division 2 is needed in order to play the game.

After six months in hiding, Aaron Keener, who was a part of the First Wave Division Agents has surfaced. He was able to develop a biological weapon based on the notes of Dr. Amherst as well as with the help of the Russian Vitaly Tchernenko, who he kidnapped during the events of Tom Clancy’s The Division.

The biological weapon was used to attack The Division Base of Operations in New York City. This resulted in the death of Top Division agents and analysts. Keener was able to take over Lower Manhattan because of this as well as because of his loyal companions who were also former First Wave Division Agents: Theo Parnell, James Dragov, Javier Kajika, and Vivian Canley.

To regain control of Lower Manhattan, the Division Agents of Washington DC had been called. The team consists of Alani Kelso, the Acting Division Commander Fay Lau, and Paul Rhodes a former Division ally.

The Division 2 is one of those games that gave a heart to the amount of content, but despite that effort, for many it was ultimately - exhausting. I was a little surprised by Ubisoft Massive’s tactics to try to fix this with even more missions, enemies and weapons instead of experimenting with new things. But in the end, the great expansion of Warlords of New York ended up as a kind of experiment, but not in the performance of the Division as such, but in the launch of a new format of additional content.

The Warlords ’main campaign is essentially - more Division and nothing more. Initially, you get four targets to reach the main villain, the runaway agent Aaron Keener, you choose the order in which you cross them and there are no major surprises. These are evil people, doing bad things for New York even though they think they are doing good things, and it is the duty of Division agents to put an end to them. A well-known format as seen in all Ubisoft games, from Assassin’s Creed through Far Cry to Ghost Recone.

Love this game, hope I can buy this new expansion soon.

Returning to New York is a bit of a refreshment for the Division’s agents, but not the surprise slide it could have been.

The price list is wrong, EPIC sell the base game for 9.89€, not the wony expansion.

Thanks for your report, we have fixed it, we wish you a great rest of the day.

Hate to see the new DLC Warlords of new york it will make me resume the game: p