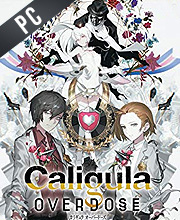 What is The Caligula Effect Overdose CD key?

It's a digital key that allows you to download The Caligula Effect Overdose directly to PC from the official Platforms.

How can I find the best prices for The Caligula Effect Overdose CD keys?

Allkeyshop.com compares the cheapest prices of The Caligula Effect Overdose on the digital downloads market to find the best sales and discount codes on trusted stores.

The Caligula Effect: Overdose is a role-playing video game that is developed by FURY Corporation and Engine Software BV and published by NIS America Inc.

Step into a fantasy world called Mobius, here you are able to escape the problems that you have in the real world. The only obstacle is that the line between reality and the real world has been blurred. You get to relive your fun high school years all over again in this perfect world but something seems strange.

You and your fellow students must find a way to escape this fake world and go back to reality.

Offering enhanced visuals and gameplay. There will also be new scenarios and endings. And while trying to find your way out of Mobius, you will also get to experience the “Forbidden Musician Route”. Also, there will be a new female protagonist as well as two new members of the Go-Home Club.

Go and make friends with over 500 other students in order to improve your skills and get back to reality.

GOG.COM CD KEY : You need to register on Gog.com, then use the GOG Key to download and activate your game to play The Caligula Effect Overdose.
STEAM GIFT : A Steam gift is a one-time transfer you receive. You activate and install The Caligula Effect Overdose to play on Steam, it is a non-refundable game that stays in your Steam games collection. Please read the store description about any language or region restrictions.
STEAM CD KEY : Use the Steam Key Code on Steam Platform to download and play The Caligula Effect Overdose. You must login to your Steam Account or create one for free. Download the (Steam Client HERE). Then once you login, click Add a Game (located in the bottom Left corner) -> Activate a Product on Steam. There type in your CD Key and the game will be activated and added to your Steam account game library.
Limited Edition
Standard Edition