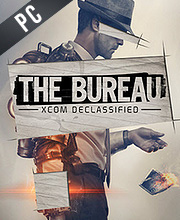 What is The Bureau XCOM Declassified CD key?

It's a digital key that allows you to download The Bureau XCOM Declassified directly to PC from the official Platforms.

How can I find the best prices for The Bureau XCOM Declassified CD keys?

Allkeyshop.com compares the cheapest prices of The Bureau XCOM Declassified on the digital downloads market to find the best sales and discount codes on trusted stores.

The Bureau XCOM Declassified is a third-person tactical shooter action/strategy game developed by 2K Marin and published by 2K Games. It is the eighth game released in the XCOM series.

The game is set in the year 1962 in the United States. With the Cold War still gripping Americans in fear, a far more powerful enemy threats America, and a top-secret government unit called The Bureau is tasked to investigate and conceal a series of attacks done by a mysterious enemy. You will play as agent William Carter, and you will lead your squad on a mission to survive, adapt, overcome the enemy, protect all of humanity, and reveal the truth about mankind’s first alien invasion.

The Bureau XCOM Declassified will take your tactical skills on a new level as you will be tasked to formulate your plan of action. Your ambushes have to be well-timed. You have to outsmart the enemy. Customize your squad using a combination of skills and unique specializations. But that’s not all – you won’t get second chances for any mistakes you make, as the game also includes a permadeath feature.

Are you ready to take on the safety of the world on your shoulders?

The Bureau XCOM Declassified amazing game i loved it su much

nice shooting game with a fair price , worth buying on sale for everyone

Thank you allkeyshop for what are you doing for us, we really appreciate it 😉

this game amazing i love it so mach 🙂