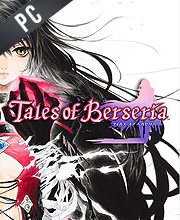 What is Tales of Berseria CD key?

It's a digital key that allows you to download Tales of Berseria directly to PC from the official Platforms.

How can I find the best prices for Tales of Berseria CD keys?

Allkeyshop.com compares the cheapest prices of Tales of Berseria on the digital downloads market to find the best sales and discount codes on trusted stores.

Dive into the story of the main character Velvet, who because of a troubled past is now full of anger and hatred. She joins a crew of pirates and travels the seas to explore the many islands of the sacred kingdom of Midgard. Tales of Berseria offers an epic story that will appeal to your emotions.

Offering a new battle system which is an upgraded form of the Linear Motion Battle System adding new options as well as new button combos. There will be six different characters to choose from, every single one is unique with different skills and Soul Breach Combo attacks.

Be mesmerized by the Cinematic sequences without the Tale’s series is famous for.

Jump right into the captivating story of Tales of Berseria, this is one game that you will not put down until you finish it.

Zoom 1m 3m 1y All
Track product
EU STEAM CD KEY: Requires an EUROPEAN IP address or you must activate it with a VPN (Virtual Private Network) in order to play Tales of Berseria. Might have languages restrictions or language packs. Read the description on the store game page to know if the EU IP is only needed for activation or for playing also (maybe on EU Servers). Most of the stores offer you their help, or show you how to do this with a tutorial to follow.
EUROPEAN STEAM GIFT : It’s a steam gift for Europe which requires an European IP address to activate and to play Tales of Berseria on Steam. Read carefully the store description about region and language restrictions.
STEAM GIFT : A Steam gift is a one-time transfer you receive. You activate and install Tales of Berseria to play on Steam, it is a non-refundable game that stays in your Steam games collection. Please read the store description about any language or region restrictions.
STEAM CD KEY : Use the Steam Key Code on Steam Platform to download and play Tales of Berseria. You must login to your Steam Account or create one for free. Download the (Steam Client HERE). Then once you login, click Add a Game (located in the bottom Left corner) -> Activate a Product on Steam. There type in your CD Key and the game will be activated and added to your Steam account game library.
STEAM KEY ROW : It means for Rest Of the World countries which are not concerned by the region restrictions. This product can't be purchased and activated in Several countries. Please read the store description to know the full list of countries which are concerned. Use the key to Download and play Tales of Berseria on Steam.
Standard Edition
Compare Choose & Buy Download (803)

Cheapest price for now would be Indiegala with 22.99€ for a bundle (Tales of Berseria + Memories of a Vagabond).

Valid until 25th September, so be fast 🙂

Instant Gaming is the best place to go if you need the key for Tales of Berseria.

This seems to be a very interesting RPG, and the best store for get this game is right now is INSTANT GAMING!