January 2017 Game Releases: 3 New Up and Coming Games to Play This Month! 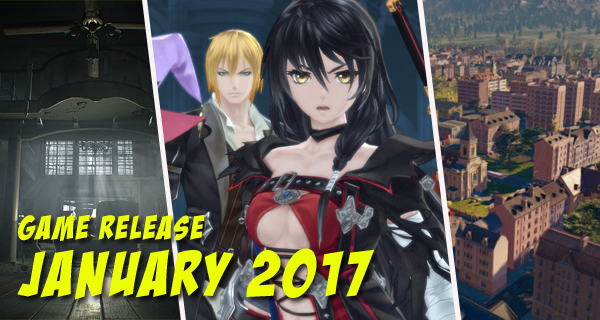 Let’s celebrate the new year with a bang! We’ve got three awesome games in our January 2017 Game Releases list that will surely entertain you for days! Read on and find out what these games have to offer! And of course, don’t forget that our price comparison tool will be of great help in checking out the best prices!

If you’re looking for a game that comes as close to Cities: Skylines as possible, then look no further! Urban Empire is described as a city building simulation game that has some politics mixed into it. The game features a time span of 20 years of European history from 1820 to 2020. You will take on the role of a “mayoral dynasty”. As a building simulation game, familiar gameplay elements such as upgrading technologies, managing citizens, and more are present.

In Resident Evil 7 Biohazard, you will get to experience terror in first-person. Set after the events on Resident Evil 6, experience sheer horror as you go and explore an isolated farmhouse located somewhere in the rural areas in America. This is survival horror at its finest, complete with a “refresh of gameplay systems”.

Tales of Berseria is an action, role-playing game that puts you in the shoes of the protagonist, Velvet. As Velvet, you will meet a crew of pirates as you set off in an adventure that spans the many islands that make up the kingdom of Midgand. The game boasts not only of stunning and breathtaking cutscenes, but also an epic, unique, and emotional storyline that will surely keep you immersed.

hmm. . .Kalypso are indeed one of my favorite devs/pubs. . .but the Urban Empire kinda seems like a hybrid clone of all the Sim cities n Civs. . .n not a good one,at that.feels lackluster with not too much substance. . .guess we’ll see.