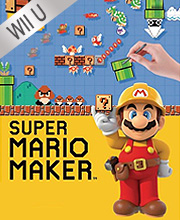 It's a digital key that allows you to download Super Mario Maker directly to Nintendo Wii U from Nintendo eShop.

How can I find the best prices for Super Mario Maker on Wii U ?

Allkeyshop.com compares the cheapest prices of Super Mario Maker on the digital downloads market to find the best sales and discount codes on trusted stores.

Super Mario Maker is a platform video game and a level editor developed by Nintendo EAD and published by Nintendo.

This is an application with which the player can create their own levels of Super Mario, with the possibility of choosing four graphic styles from several games in the series. The game allows the player to invent and create levels of Mario, then try them, providing an almost unlimited number of possibilities. You can customize the enemies and platforms, change the size of the pipes, record your own sound effects and triggers during game play.

You will have access to decorations from Super Mario Bros., Super Mario Bros. 3, Super Mario World and New Super Mario Bros. U. It is possible to create enemies or obstacles which are unusual and original in the traditional games, such as guns Cheep Cheep-winged, pipes generating Bowsers or blocks harboring Piranha Plants or various enemies. The game features dozens of playable levels directly, without an Internet connection.

The levels created by players can be shared via the Internet and a scoring system used to find the most popular. Amiibo different figures can be used in the game (only with Super Mario Bros. style). The 8-bit Mario figurine Mario used to display larger, while other figures allows Mario to don a costume representing the character of the figurine. It is also possible to unlock a costume ending each of the 100 Challenge Mario. Mario offers options for all tastes, hours of fun alone or with others.