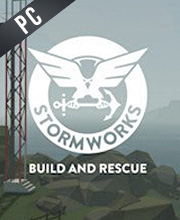 What is Stormworks Build and Rescue CD key?

It's a digital key that allows you to download Stormworks Build and Rescue directly to PC from the official Platforms.

How can I find the best prices for Stormworks Build and Rescue CD keys?

Allkeyshop.com compares the cheapest prices of Stormworks Build and Rescue on the digital downloads market to find the best sales and discount codes on trusted stores.

Stormworks: Build and Rescue is a simulation video game that is developed by Sunfire Software and published by Green Man Gaming Publishing.

Go and custom design your very own air sea rescue service. Design your vehicles as well as program them in what they are able to do. Plan and execute rescues in the different crisis scenarios. Get to share the missions and vehicles that you were able to design with other players.

Offering a rich editing suite that will allow you to customize and design your rescue vehicles. You can also program the vehicle’s behavior thanks to the powerful in-game logic system. A variety of components for rescue helicopters, boats, submarines and so much more are available.

Use your created vehicles on over 15,000 square kilometers of oceans and islands, using the right vehicle for the job. The world is completely dynamic having a night and day cycle and a weather system.

Play in the game’s 2 modes, the Creative Mode which lets you create the situations and vehicles for your missions and the other mode is the Career Mode that lets you focus on progression for your rescue service. You will start small and eventually build yourself up as you unlock more components and gather money as you progress.

Stormworks: Build and Rescue is a different kind of simulation game that will release the inner hero in you.

EUROPEAN STEAM GIFT : It’s a steam gift for Europe which requires an European IP address to activate and to play Stormworks Build and Rescue on Steam. Read carefully the store description about region and language restrictions.
STEAM GIFT : A Steam gift is a one-time transfer you receive. You activate and install Stormworks Build and Rescue to play on Steam, it is a non-refundable game that stays in your Steam games collection. Please read the store description about any language or region restrictions.
STEAM CD KEY : Use the Steam Key Code on Steam Platform to download and play Stormworks Build and Rescue. You must login to your Steam Account or create one for free. Download the (Steam Client HERE). Then once you login, click Add a Game (located in the bottom Left corner) -> Activate a Product on Steam. There type in your CD Key and the game will be activated and added to your Steam account game library.
Early Access
Standard Edition