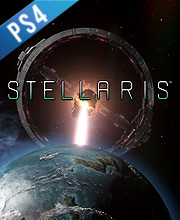 What is Stellaris Game Code?

It's a digital key that allows you to download Stellaris directly to Playstation 4 from PSN (Playstation network).

Allkeyshop.com compares the cheapest prices of Stellaris on the digital downloads market to find the best sales and discount codes on trusted stores.

As you travel through space, get ready to investigate, discover, and communicate with a wide range of species. Create a galactic empire by sending out science ships to examine and explore while building ships erect stations around recently discovered planets.

Stellaris is an aesthetically beautiful and rich in storytelling, and I’m fully enamoured to it. It plays beautifully on console, and it’s the kind of game that’s impossible to put down once you start playing.

The only offering of its ilk on PS4, Stellaris: Console Edition squeezes a galaxy of emergent strategy, discovery and story onto Sony’s home console with very little compromise. Stellaris is certainly the biggest, if not one of the best pure strategy titles you can get on PS4 right now.

The Deluxe Edition contains the base game and the following packs:

The complexity of the galaxy is at your fingertips with Stellaris: Console Edition, which offers the same rich strategic gameplay, numerous alien races, and emergent storytelling.

The sleeping giants of the cosmos, the Fallen Empires, who may still be roused from their centuries-long slumber, hostile pockets of resistance to your civilisation, and rich systems guarded by ferocious animals.

EUROPEAN BOX GAME : This is an European version for Stellaris in Box Edition (DVD-CD ROM). This is not a downloadable product. Please read the sellers page for any additional costs (taxes, shipping), delivery time for your country and languages available.
PLAYSTATION CODE : This a Playstation Game Code to download Stellaris. Activate the code on the Playstation Network. Read carefully the store description about any language and region restrictions.
Deluxe Edition
Standard Edition
Compare Choose & Buy Download (723)