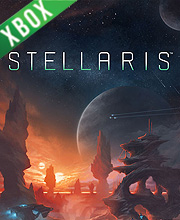 What is Stellaris Game Code?

It's a digital key that allows you to download Stellaris directly to Xbox One from Xbox Live.

How can I find the best prices for Stellaris on Xbox one?

Allkeyshop.com compares the cheapest prices of Stellaris on the digital downloads market to find the best sales and discount codes on trusted stores.

As you travel through space, get ready to investigate, discover, and communicate with a wide range of species. Create a galactic empire by sending out science ships to examine and explore while building ships erect stations around recently discovered planets.

While the PC version came out in 2016, Stellaris: Console Edition delivers one of the most amazing individual experiences to be found on the Xbox One to date. Full customization and so much content that you will easily wonder where the last two weeks of your life went. Stellaris is a game that allows you to become a benevolent leader, interstellar overlord and everything in between, and tailors a graphically beautiful real time strategy experience that shouldn’t be missed.

Fans of strategy and sim genres will get a huge amount of fun from Stellaris: Console Edition, burning a ton of man-hours as they take their people on an epic journey across the universe. It’s a game that is all about self-narrative and the creation of stories, and I guess that is what has got me utterly hooked.

The Deluxe Edition contains the base game and the following:

In Relic Worlds, explore the remains of long-gone civilizations to put together the tale of their rise and ultimate demise.Stellaris:

In the brand-new discovery-themed story pack Distant Stars, players will explore new oddities and plotlines while also coming across bizarre new creatures in the unexplored reaches of space. containing brand-new surprises that could either aid or hurt intrepid explorers

With unique artwork and animations, Plantoids Species Pack delivers a new genotype for gamers. Fans of Stellaris will be able to interact with a plant-like creature in Plantoids, as the title suggests, which has evolved sentience and started to spread its tendrils throughout the galaxy in order to establish new civilizations on other worlds.