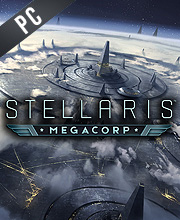 What is Stellaris MegaCorp CD key?

It's a digital key that allows you to download Stellaris MegaCorp directly to PC from the official Platforms.

How can I find the best prices for Stellaris MegaCorp CD keys?

Allkeyshop.com compares the cheapest prices of Stellaris MegaCorp on the digital downloads market to find the best sales and discount codes on trusted stores.

Stellaris: MegaCorp is a simulation, strategy video game that is developed by Paradox Development Studio and published by Paradox Interactive. This is a downloadable content, so the base game Stellaris is needed to play it.

Offering an economy focused expansion where you could be the CEO of a corporate empire. Business could be expanded galaxy-wide. Go and build branch offices on other planets and create trade agreements. With the use of the new Corporate Authority, players are able to make an economic powerhouse and command the galactic trade.

The population density of core worlds can now be increased to epic proportions all thanks to the Ecumenopolis. For great bargains, always keep an eye out for the Caravaneers. They are master traders who stir clear from galactic politics.

Also, pops can now be bought or sold at an industrial scale. You can either keep them or set them free, it is your choice. Another thing added to this expansion is that the budget for Megastructures has been granted so you can build your humongous, glorious structures.

GOG.COM CD KEY : You need to register on Gog.com, then use the GOG Key to download and activate your game to play Stellaris MegaCorp.
EU STEAM CD KEY: Requires an EUROPEAN IP address or you must activate it with a VPN (Virtual Private Network) in order to play Stellaris MegaCorp. Might have languages restrictions or language packs. Read the description on the store game page to know if the EU IP is only needed for activation or for playing also (maybe on EU Servers). Most of the stores offer you their help, or show you how to do this with a tutorial to follow.
EUROPEAN STEAM GIFT : It’s a steam gift for Europe which requires an European IP address to activate and to play Stellaris MegaCorp on Steam. Read carefully the store description about region and language restrictions.
STEAM GIFT : A Steam gift is a one-time transfer you receive. You activate and install Stellaris MegaCorp to play on Steam, it is a non-refundable game that stays in your Steam games collection. Please read the store description about any language or region restrictions.
STEAM CD KEY : Use the Steam Key Code on Steam Platform to download and play Stellaris MegaCorp. You must login to your Steam Account or create one for free. Download the (Steam Client HERE). Then once you login, click Add a Game (located in the bottom Left corner) -> Activate a Product on Steam. There type in your CD Key and the game will be activated and added to your Steam account game library.
STEAM KEY ROW : It means for Rest Of the World countries which are not concerned by the region restrictions. This product can't be purchased and activated in Several countries. Please read the store description to know the full list of countries which are concerned. Use the key to Download and play Stellaris MegaCorp on Steam.
Windows 10 Global : This is an Worldwide Microsoft code to play on PC for Worldwide . You need to have installed Windows 10 Anniversary Edition update on your PC. Log into your Microsoft account to download and play. Read closely the description given by the store to activate your game.
Bundle
DLC
DLC Pack
Ultimate Bundle

Bought Stellaris Megacorp from HRK and got the DLC removed after a while by steam stating that “there was a problem with the payment, please contact the retailer”
Beware with HRK, cheap can be expensive…