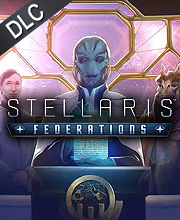 What is Stellaris Federations CD key?

It's a digital key that allows you to download Stellaris Federations directly to PC from the official Platforms.

How can I find the best prices for Stellaris Federations CD keys?

Allkeyshop.com compares the cheapest prices of Stellaris Federations on the digital downloads market to find the best sales and discount codes on trusted stores.

Stellaris: Federation is a simulation, strategy video game developed by Paradox Development and published by Paradox Interactive. This is a downloadable content for the base game Stellaris, which is needed in order to play the game.

The Federation’s expansion offers players the chance to extend their diplomatic dominion over the galaxy with new options that will allow you to influence, manipulate and dominate.

Build up the internal cohesion of your federations to unlock powerful rewards for all members. Choose to join the Trade League, Martial Alliance, or Hegemony, consider the membership as it is advantageous.

A galactic senate has been placed in order to unite the space empires. Votation of a wide range of resolutions can be done to drive legislative agendas.

Every empire comes with a story, create deeper story roots for your civilization with the new System of Origins.

Zoom 1m 3m 1y All
Track product
GOG.COM CD KEY : You need to register on Gog.com, then use the GOG Key to download and activate your game to play Stellaris Federations.
EU STEAM CD KEY: Requires an EUROPEAN IP address or you must activate it with a VPN (Virtual Private Network) in order to play Stellaris Federations. Might have languages restrictions or language packs. Read the description on the store game page to know if the EU IP is only needed for activation or for playing also (maybe on EU Servers). Most of the stores offer you their help, or show you how to do this with a tutorial to follow.
EUROPEAN STEAM GIFT : It’s a steam gift for Europe which requires an European IP address to activate and to play Stellaris Federations on Steam. Read carefully the store description about region and language restrictions.
STEAM GIFT : A Steam gift is a one-time transfer you receive. You activate and install Stellaris Federations to play on Steam, it is a non-refundable game that stays in your Steam games collection. Please read the store description about any language or region restrictions.
STEAM CD KEY : Use the Steam Key Code on Steam Platform to download and play Stellaris Federations. You must login to your Steam Account or create one for free. Download the (Steam Client HERE). Then once you login, click Add a Game (located in the bottom Left corner) -> Activate a Product on Steam. There type in your CD Key and the game will be activated and added to your Steam account game library.
STEAM KEY ROW : It means for Rest Of the World countries which are not concerned by the region restrictions. This product can't be purchased and activated in Several countries. Please read the store description to know the full list of countries which are concerned. Use the key to Download and play Stellaris Federations on Steam.
DLC
Standard Edition
Ultimate Bundle
Compare Choose & Buy Download (772)