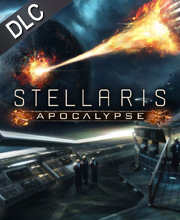 What is Stellaris Apocalypse CD key?

It's a digital key that allows you to download Stellaris Apocalypse directly to PC from the official Platforms.

How can I find the best prices for Stellaris Apocalypse CD keys?

Allkeyshop.com compares the cheapest prices of Stellaris Apocalypse on the digital downloads market to find the best sales and discount codes on trusted stores.

Stellaris Apocalypse is a simulation strategy video game that is developed by Paradox Development Studio and published by Paradox Interactive. This is a downloadable content and would need the base game Stellaris to play.

Stellar Warfare has been redefined in this full expansion. It includes a lot of new options for both offensive and defensive play. Entire worlds will be at your mercy with the new “planet-killer” weapon called the “Colossus”. This device is so terrifying that it could eliminate whole worlds. Lead your fleets to conquest with the “Titan” capital ships that give out bonuses to those under their command. New orbital installations, as well as impenetrable bastions, are available for you to secure the homeland.

Watch out for the space nomads called the Marauders. If you are smart enough and can handle them, you can use them as mercenaries for your benefit but don’t trust them completely as they may create problems for you.

Additional features include new musical scores from Andreas Waldetoft as well as new Ascension Perks and Civics and Unity Ambitions.

Go on a planet-shattering expedition with Stellaris Apocalypse.

Zoom 1m 3m 1y All
Track product
GOG.COM CD KEY : You need to register on Gog.com, then use the GOG Key to download and activate your game to play Stellaris Apocalypse.
EU STEAM CD KEY: Requires an EUROPEAN IP address or you must activate it with a VPN (Virtual Private Network) in order to play Stellaris Apocalypse. Might have languages restrictions or language packs. Read the description on the store game page to know if the EU IP is only needed for activation or for playing also (maybe on EU Servers). Most of the stores offer you their help, or show you how to do this with a tutorial to follow.
EUROPEAN STEAM GIFT : It’s a steam gift for Europe which requires an European IP address to activate and to play Stellaris Apocalypse on Steam. Read carefully the store description about region and language restrictions.
STEAM CD KEY : Use the Steam Key Code on Steam Platform to download and play Stellaris Apocalypse. You must login to your Steam Account or create one for free. Download the (Steam Client HERE). Then once you login, click Add a Game (located in the bottom Left corner) -> Activate a Product on Steam. There type in your CD Key and the game will be activated and added to your Steam account game library.
STEAM KEY ROW : It means for Rest Of the World countries which are not concerned by the region restrictions. This product can't be purchased and activated in Several countries. Please read the store description to know the full list of countries which are concerned. Use the key to Download and play Stellaris Apocalypse on Steam.
Windows 10 Global : This is an Worldwide Microsoft code to play on PC for Worldwide . You need to have installed Windows 10 Anniversary Edition update on your PC. Log into your Microsoft account to download and play. Read closely the description given by the store to activate your game.
Bundle
DLC
Standard Edition
Ultimate Bundle
Compare Choose & Buy Download (759)