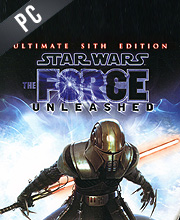 It's a digital key that allows you to download Star Wars The Force Unleashed Ultimate Sith directly to PC from the official Platforms.

How can I find the best prices for Star Wars The Force Unleashed Ultimate Sith CD keys?

Allkeyshop.com compares the cheapest prices of Star Wars The Force Unleashed Ultimate Sith on the digital downloads market to find the best sales and discount codes on trusted stores.

The game includes a main campaign plus three exclusive, re-imagined Classic Trilogy levels: Tatooine, Jedi Temple, and the all-new Hoth level. It also includes all original missions from The Force Uleashed as well as all downloadable content which includes costumes, character skins, and more.

The game promises players a story that will bring them to the deepest and darkest side of the Force – one that will put them in a collision course with Luke Skywalker. You will play as Darth Vader’s “Secret Apprentice”, and your mission is to unveil new revelations about the Star Wars galaxy. Armed with unprecedented powers, unleash them using epic and devastating combos against enemies.

Along with it comes the discovery about the Secret Apprentice through the story that was set between Episodes III and IV. With life-like character reactions and environment, you are also sure to have a more immersive gameplay experience.

i wach all star wars movies was very nice,and love it ,i well try to buy the game