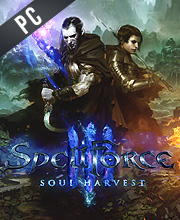 It's a digital key that allows you to download SpellForce 3 Soul Harvest directly to PC from the official Platforms.

How can I find the best prices for SpellForce 3 Soul Harvest CD keys?

Allkeyshop.com compares the cheapest prices of SpellForce 3 Soul Harvest on the digital downloads market to find the best sales and discount codes on trusted stores.

SpellForce 3: Soul Harvest is a strategy, role-playing video game that is developed by Gilmore Games and published by THQ Nordic.

You will play as a disgraced General who is called back to help in the war. This is the cusp of a new era, three years from the Purity Wars.

There will be 5 factions to choose from which are the Humans, Orcs, Elves, Dwarves, and Dark Elves. Get to build up your heroes via a deep skill tree. There will also be varied mechanics that your army is able to use to secure your victory.

When playing in multiplayer every faction will get three unique heroes, a modern player lobby, new game modes and if you would like, new modding tools to create your own maps.

As compared to the original game, SpellForce 3, this offers a new story campaign with around 20 hours of content. There are new abilities and skill trees, a new RTS Gameplay, new mechanics, new flying units, new factions as well as an overhauled UI.

The Franchise Pack is the complete Spellforce bundle!