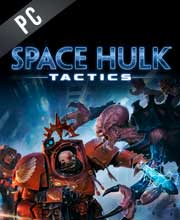 You can participate to these tests by adding comments about your digital download purchase in the store review page. Enjoy the best deals for Space Hulk Tactics CD Key with Allkeyshop.com!

Space Hulk Tactics is a strategy video game that is developed by Cyanide Studio and published by Focus Home Interactive.

Set in the Warhammer 40,000 universe this game is the faithful adaptation of the board game Space Hulk. Bloody battles are immense with twisted mass of asteroids, wrecked starships, and so much debris.

Choose your squad, be it the Terminator Space Marines or perhaps the deadly alien Genestalkers. Go through the two narrative driven campaigns with the new form of their unique Card System, you will get to customize your squad in many different ways with this system. When used at the right moment, you can turn the tides of battle with powerful abilities and create game-changing effects.

Create a custom squad of different unit types from one of the four Space Marine chapters available. Choose from the Blood Angels, the Space Wolves, the Ultramarines, and the Dark Angeles. There will be a built intuitive map creation tool in order to create your own maps that include your custom objectives.

Choose who to fight for! Will it be the aliens or the humans? It is your choice!

Be the first one to write a review about Space Hulk Tactics !

Can be good game I dont say that but it’s not in my taste.

I played the Space Hulk of 2013 and didn’t like it. I doubt this will be much better

Some great deals to be had looks like raiding the piggy bank again @:)

This Space Hulk Tactics looks nice. Reminds me of the XCom games.

I like what I see from the new entry in Space Hulk but hopefully more resellers will offer it soon!