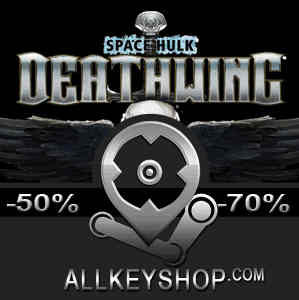 It's a digital key that allows you to download Space Hulk Deathwing directly to PC from the official Platforms.

How can I find the best prices for Space Hulk Deathwing CD keys?

Allkeyshop.com compares the cheapest prices of Space Hulk Deathwing on the digital downloads market to find the best sales and discount codes on trusted stores.

Space Hulk: Deathwing is an action, adventure developed by Streum On Studio and published by Focus Home Interactive.

Set in the Warhammer 40,000 Universe, your role is a Space Marine from the top secret and feared sector called the Deathwing of the Dark Angels Chapter.

Space Hulks are dimensions of chaos that grow in size even as big as the moon. It contains a lot of the debris in the universe like shipwrecks, scattered asteroids and more often than not contains treasures like last ancient technologies. But beware though, Space Hulks are also infested by the very deadly Genestealers.

As a Space Marine, battle with Genestealers and level up your character. Unlock new abilities by filling up your 3 skill trees. Also, get to customize your armors and weapons and make is as powerful as you can.

Play with friends in the multiplayer co-op mode and go on epic battles as a deadly Terminator Squad.

instant gaming has the lowest price,so that makes it the best choice

Instant Gaming has a nice deal for this game. If you are looking for great prices on this game go there and you wont be disappointed for sure!

Kinguin is always a reliable store for me so far. For many years I’ve bought keys from them and all of them have worked just fine.

G2Play, Kinguin or Instant have cheap keys for SH:D as of December 14.