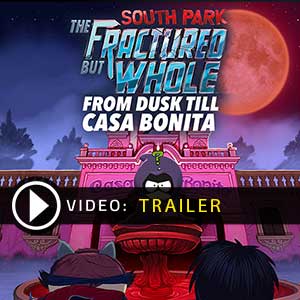 You can participate to these tests by adding comments about your digital download purchase in the store review page. Enjoy the best deals for South Park The Fractured But Whole From Dusk Till Casa Bonita CD Key with Allkeyshop.com!

From Dusk Till Dawn will focus on Mysterion as well as his sister Karen who gets kidnapped by the Vampire Kids. They threaten to make her one of them.

The Vampire Kids has taken Karen to the eatery named Casa Bonita and your mission as The New Kid will team up with Mysterion, The Coon and a goth lady named Henrietta Biggle. Henrietta offers a supporting role as a Witch. Take down the entire Vampire Legion of Vampire Kids with your squad and save Karen.

A brand new story awaits in this newest South Park adventure. Get to fight the wrongdoers with a new buddy – Henrietta Biggle. A new class has also been added – the Netherborn Class that includes three new powers plus a new ultimate.

Be the first one to write a review about South Park The Fractured But Whole From Dusk Till Casa Bonita !