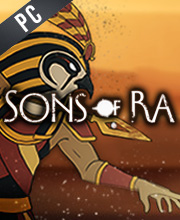 What is Sons of Ra CD key?

It's a digital key that allows you to download Sons of Ra directly to PC from the official Platforms.

How can I find the best prices for Sons of Ra CD keys?

Allkeyshop.com compares the cheapest prices of Sons of Ra on the digital downloads market to find the best sales and discount codes on trusted stores.

Sons of Ra is a tug of war style competitive tower defense game developed by indie studio Pharaoh Hound Games, play solo or with friends in this unique strategy game. After the death of the pharaoh, the rulers of lower and upper Egypt not satisfied with their piece of the pie wanted more and fought each other for control over the entirety of the Kingdom. Choose a side, build your army, to conquer and destroy your enemies. Only one may survive as the true ruler of Egypt.

Sons of Ra is a tight and fast-paced competitive game with a neat setting and flavorful presentation, though does suffer from some balancing issues.

This Edition of Sons of Ra contains the base game plus the Sons of Ra official soundtrack which has 19 tracks in total taken from the game.

STEAM CD KEY : Use the Steam Key Code on Steam Platform to download and play Sons of Ra. You must login to your Steam Account or create one for free. Download the (Steam Client HERE). Then once you login, click Add a Game (located in the bottom Left corner) -> Activate a Product on Steam. There type in your CD Key and the game will be activated and added to your Steam account game library.
Standard Edition
Compare Choose & Buy Download (743)