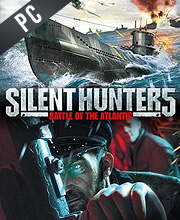 What is Silent Hunter 5 CD key?

It's a digital key that allows you to download Silent Hunter 5 directly to PC from the official Platforms.

How can I find the best prices for Silent Hunter 5 CD keys?

Allkeyshop.com compares the cheapest prices of Silent Hunter 5 on the digital downloads market to find the best sales and discount codes on trusted stores.

Put on your captain’s hat and command your very own German Type VII U-boat. You will take the place of Captain Rhan who will be manning another submarine. You will play in a first person view as you take on the Allied forces across the Atlantic Ocean and Mediterranean Seas.

Silent Hunter 5: Battle of the Atlantic has a better interface, making it easier for beginners to control the sub. You will also put your strategy skills to the test as you figure out which target you need to attack first. You can open new locations, upgrades and vast new possibilities. You can also try out the Multiplayer Mode and play with your friends. Your eyes will definitely feast on the cinematic experience the game has to offer.

Get ready to command your very own submarine!