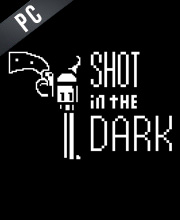 What is Shot In The Dark CD key?

It's a digital key that allows you to download Shot In The Dark directly to PC from the official Platforms.

How can I find the best prices for Shot In The Dark CD keys?

Allkeyshop.com compares the cheapest prices of Shot In The Dark on the digital downloads market to find the best sales and discount codes on trusted stores.

Shot in the Dark is an action, indie, FPS video game developed and published by Technomancy Studios. This is a multiplayer arena shooting game.

A definitely dark game in its literal sense. Turn up the brightness of your screen for this one, hopefully it will help a bit. You will have to finish levels that are very dark as well as shoot people that are almost invisible.

The setting is in a dystopian future where numerous factions send out agents to collect government information. You will be playing as one of these agents. You will be equipped with the highest quality technology: a powerful cold-fusion pulse rifle that shoots mighty lasers.

Light will be a commodity in this game because of the Inviso-Tech draining all electrical systems in the surrounding area. You will have to count on sound and the little amount of light that is available in the game to survive this skirmish. Only one can emerge triumphant, so make sure to use your skills and survive this mission at hand.

Pretty decent graphics and a rockin’ soundtrack as well as a thrilling game play is what awaits you! Keep your eyes sharp and your ears sharper as you take the risk and play this super stealthy skirmish.

STEAM CD KEY : Use the Steam Key Code on Steam Platform to download and play Shot In The Dark. You must login to your Steam Account or create one for free. Download the (Steam Client HERE). Then once you login, click Add a Game (located in the bottom Left corner) -> Activate a Product on Steam. There type in your CD Key and the game will be activated and added to your Steam account game library.
Early Access
Standard Edition