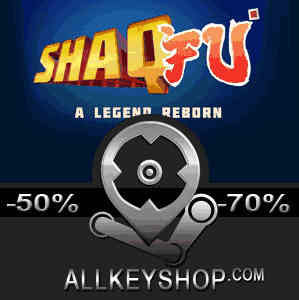 What is Shaq Fu A Legend Reborn CD key?

It's a digital key that allows you to download Shaq Fu A Legend Reborn directly to PC from the official Platforms.

How can I find the best prices for Shaq Fu A Legend Reborn CD keys?

Allkeyshop.com compares the cheapest prices of Shaq Fu A Legend Reborn on the digital downloads market to find the best sales and discount codes on trusted stores.

Shaq Fu: A Legend Reborn is an action video game that is developed by Big Deez Productions and published by Mad Dog Games.

It is chaos as the biggest celebrities were able to reveal their true faces which are demons that are hell bent in making everybody stupid and getting control of the whole planet. There is only one man who can save the world and it is Shaq Fei Hung, a Chinese orphan who has been trained by the Kung Fu Masters themselves. Shaq must travel far and wide to fight evil!

The game is a complete reimagining of the Shaq Fu legend. Voiced over by Shaquille O’Neal himself get to fight against outlandish celebrities in hilarious boss battles. Travel through China, South America, LA, Fiji and even the inferno itself to search and Kick the butts of evil. Master Shaq’s powerful moves with devastating combos and choose from the variety of weapons available.

Fulfill Shaq Fei Hung’s destiny as the chosen one in Shaq Fu: A Legend Reborn.

GOG.COM CD KEY : You need to register on Gog.com, then use the GOG Key to download and activate your game to play Shaq Fu A Legend Reborn.
STEAM CD KEY : Use the Steam Key Code on Steam Platform to download and play Shaq Fu A Legend Reborn. You must login to your Steam Account or create one for free. Download the (Steam Client HERE). Then once you login, click Add a Game (located in the bottom Left corner) -> Activate a Product on Steam. There type in your CD Key and the game will be activated and added to your Steam account game library.
Bonus Edition
Standard Edition
Compare Choose & Buy Download (710)