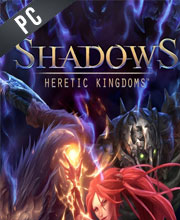 It's a digital key that allows you to download Shadows Heretic Kingdoms directly to PC from the official Platforms.

How can I find the best prices for Shadows Heretic Kingdoms CD keys?

Allkeyshop.com compares the cheapest prices of Shadows Heretic Kingdoms on the digital downloads market to find the best sales and discount codes on trusted stores.

Shadows: Heretic Kingdoms is an RPG video game published and developed by Games Farm Games and BitComposer. This is the next installment in the saga Heretic Kingdoms. In the world of Heritic Kingdoms after the oppressive Theocracy has been over thrown the fragile state of peace is threatened as various factions seek to gain power and control. You take on the role of a Devourer who as implies devours the souls of his enemies traveling between the shadow world and the world of humans. You are able to switch between the role of Devourer and up to three other members in your party allowing you more freedom of movement and options as the situation arises.

Specifically, you have the ability to influence the course of history according to your actions good or bad. The destinies of the world are so numerous, and the scenario is complex and captivating! Another surprise of the game: because you devour the souls of the dead, you will be able to incarnate these souls and therefore fifteen different characters this makes it addictive and adds to the various outcomes in your control.

EU STEAM CD KEY: Requires an EUROPEAN IP address or you must activate it with a VPN (Virtual Private Network) in order to play Shadows Heretic Kingdoms. Might have languages restrictions or language packs. Read the description on the store game page to know if the EU IP is only needed for activation or for playing also (maybe on EU Servers). Most of the stores offer you their help, or show you how to do this with a tutorial to follow.
EUROPEAN STEAM GIFT : It’s a steam gift for Europe which requires an European IP address to activate and to play Shadows Heretic Kingdoms on Steam. Read carefully the store description about region and language restrictions.
STEAM GIFT : A Steam gift is a one-time transfer you receive. You activate and install Shadows Heretic Kingdoms to play on Steam, it is a non-refundable game that stays in your Steam games collection. Please read the store description about any language or region restrictions.
STEAM CD KEY : Use the Steam Key Code on Steam Platform to download and play Shadows Heretic Kingdoms. You must login to your Steam Account or create one for free. Download the (Steam Client HERE). Then once you login, click Add a Game (located in the bottom Left corner) -> Activate a Product on Steam. There type in your CD Key and the game will be activated and added to your Steam account game library.
Standard Edition

An amazing game. I have played many games of this sort but this game kept me going! Truly I would like to see it continuing. I feel like I have not seen enough yet.

although a few years old, this game is still very playable and a nice game overall 🙂

G2A is a good store to buy games. I bought several and had no problems.

Do not buy from Kinguin. Got wrong cdkey and after 1 day no reply from support.

thanks allkeyshop this game amazing