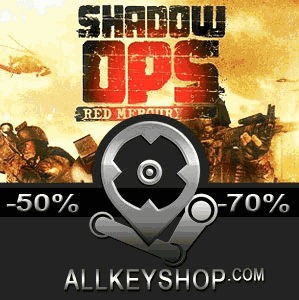 It's a digital key that allows you to download Shadow Ops Red Mercury directly to PC from the official Platforms.

How can I find the best prices for Shadow Ops Red Mercury CD keys?

Allkeyshop.com compares the cheapest prices of Shadow Ops Red Mercury on the digital downloads market to find the best sales and discount codes on trusted stores.

Shadow Ops: Red Mercury is a  is an action-oriented first person shooter developed by Zombie Studios and published by Atari.

Shadow Ops: Red Mercury does not have regenerating health, and  the player solely relies on health pickups found throughout each mission. Your goal is a race against time, you must fight terrorism as a member of the elite counter terrorist team in an all-out war.

The game takes place in the hostile streets of the Middle-East, where danger can come from any direction, to the landmarks of a major European city. Your duty is to hunt down a terrorist leader carrying a nuclear device before great destruction is unleashed. Combine all-out assault with stealth infiltration in your mission to prevent disaster.

Shadow Ops: Red Mercury is your basic FPS Where you must stop a Backpack Nuke from getting in the wrong hands and being used. You’re met with fierce aggression, and many, perhaps too many, enemies that pop out of nowhere at times, but this game’s cinematic feels keeps you immersed in the action ducking to find cover and figure out where the hostiles are.

Your team does a good job of helping take out some of the enemies but you feel out numbered 5-1 at times. Your firefights are immense with exploding drums and grenades, making it feel like you’re in the middle of a real mission.

The action is intense and details such as breakable and movable objects go hand in hand with live action. With all these said, this game is an immersive FPS that will entertain the casual player for hours .

GOG.COM CD KEY : You need to register on Gog.com, then use the GOG Key to download and activate your game to play Shadow Ops Red Mercury.
STEAM CD KEY : Use the Steam Key Code on Steam Platform to download and play Shadow Ops Red Mercury. You must login to your Steam Account or create one for free. Download the (Steam Client HERE). Then once you login, click Add a Game (located in the bottom Left corner) -> Activate a Product on Steam. There type in your CD Key and the game will be activated and added to your Steam account game library.
Standard Edition
Compare Choose & Buy Download (743)