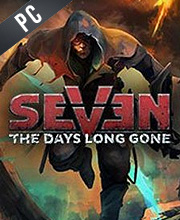 What is Seven The Days Long Gone CD key?

It's a digital key that allows you to download Seven The Days Long Gone directly to PC from the official Platforms.

How can I find the best prices for Seven The Days Long Gone CD keys?

Allkeyshop.com compares the cheapest prices of Seven The Days Long Gone on the digital downloads market to find the best sales and discount codes on trusted stores.

Seven: The Days Long Gone is an action, adventure, role-playing game developed by IMGN.PRO and Fool’s Theory and published by IMGN.PRO.

Welcome to the open world prison island named Peh. You will be free to roam the island as a master thief named Teriel. It all starts with a bust gone wrong and Teriel finds himself on an airship bound to the infamous island of Peh.

Your main goal is to survive Peh as well as escape the deceit and betrayal that surrounds you on the prison island. You can run, climb, sneak and fight your way across the island. Be careful though because there are dangerous factions as well as monster-infested areas.

Choose how you would want to play the game. Either go on full stealth or perhaps face to face with the enemy. Use your environment to keep hidden or use disguises. If you do choose to fight there are quite a few available weapons to choose from as well as magical abilities.

Get a chance to either help or exploit the island’s inhabitants. Watch out though because your actions would actually have consequences.

GOG.COM CD KEY : You need to register on Gog.com, then use the GOG Key to download and activate your game to play Seven The Days Long Gone.
EU STEAM CD KEY: Requires an EUROPEAN IP address or you must activate it with a VPN (Virtual Private Network) in order to play Seven The Days Long Gone. Might have languages restrictions or language packs. Read the description on the store game page to know if the EU IP is only needed for activation or for playing also (maybe on EU Servers). Most of the stores offer you their help, or show you how to do this with a tutorial to follow.
STEAM CD KEY : Use the Steam Key Code on Steam Platform to download and play Seven The Days Long Gone. You must login to your Steam Account or create one for free. Download the (Steam Client HERE). Then once you login, click Add a Game (located in the bottom Left corner) -> Activate a Product on Steam. There type in your CD Key and the game will be activated and added to your Steam account game library.
Collector Edition
Standard Edition
Compare Choose & Buy Download (743)

I strongly advise you have a try at this game, I enjoyed it a fair bit myself and the price for it is great!

have a big thanks to try to make us happy withe your games deals!

Hoping for a better deal, I wish the price goes under 15€ soon!

You know, allkeyshop kinda acts as a game discovery tool (what’s cheap and looks interesting too). I might have to try this one.