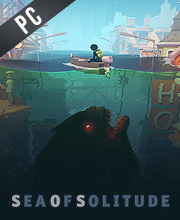 What is Sea of Solitude CD key?

It's a digital key that allows you to download Sea of Solitude directly to PC from the official Platforms.

How can I find the best prices for Sea of Solitude CD keys?

Allkeyshop.com compares the cheapest prices of Sea of Solitude on the digital downloads market to find the best sales and discount codes on trusted stores.

Sea of Solitude is an action–adventure video game that is developed by Jo-Mei Games and published by Electronic Arts Inc. The game is an episodic platformer that centers around the theme of love and loneliness.

Get to play as Kay on her solitary journey. She is slowly transforming into a monster and she is trying her best to find out what is happening to her. The world that she is journeying across is a flooded mess. However, on her journey, she realizes that it is not the other monsters that is her enemies but something more dangerous.

Offering a gameplay presented in a third-person perspective and focuses on exploration, completing challenges as well as solving puzzles of logic. You will be able to run, jump, swim, use a boat, or move objects within the game to reach your destination.

Enjoy original graphics that looks stunning just like an animated motion picture. The story is deep, giving a message about loneliness and how this could slowly change you into a monster.

ORIGIN CD KEY : Use the Origin Key Code (Electronic Arts - EA) on Origin Platform to download and play Sea of Solitude. You have to login to your Origin Account or create one for free. Download and install the Origin Software HERE) then you can activate the game on it. Once installed, start Origin, click on the Origin Tab and click on Redeem Product Code and just enter the key. The game will appear in your My games list.
ORIGIN KEY ROW : It means for Rest Of the World countries which are not concerned by the region restrictions. This product can't be purchased and activated in Several countries. Please read the store description to know the full list of countries which are concerned. Use the key to Download and play Sea of Solitude on Origin.
EUROPEAN STEAM GIFT : It’s a steam gift for Europe which requires an European IP address to activate and to play Sea of Solitude on Steam. Read carefully the store description about region and language restrictions.
STEAM GIFT : A Steam gift is a one-time transfer you receive. You activate and install Sea of Solitude to play on Steam, it is a non-refundable game that stays in your Steam games collection. Please read the store description about any language or region restrictions.
Standard Edition

Sea of Solitude is not alone in its thematic framework, and although it brings a somewhat original story, there are better quality games on the market that should be given priority.

I watched the teaser trailer of this game, it’s that type of games that I like most, a surreal journey with Good puzzles, like limbo, Inside and little nightmares but in beautiful 3D graphics!