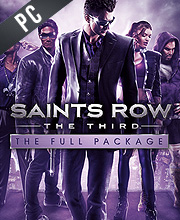 What is Saints Row the Third Full Package CD key?

It's a digital key that allows you to download Saints Row the Third Full Package directly to PC from the official Platforms.

How can I find the best prices for Saints Row the Third Full Package CD keys?

Allkeyshop.com compares the cheapest prices of Saints Row the Third Full Package on the digital downloads market to find the best sales and discount codes on trusted stores.

Saints Row: The Third is an open world action–adventure videogame developed by Volition and published by THQ. It is the third title in the Saints Row series. As in the previous games, the player-character leads the Third Streets Saints gang in a turf war against three rival gangs using a variety of weapons and vehicles in single-player and cooperative play. The series, and especially this title, is known for its crazy scenarios and lighthearted gameplay.

The premiere edition of Saints Row: The Third – The Full Package includes the award-winning, critically-acclaimed, almost universally lauded Saints Row: The Third; the three downloadable mission packs Genkibowl VII, Gangstas in Space, and The Trouble With Clones; and more than 30 bonus DLC items from such hits as the Shark Attack Pack, Witches & Wieners pack, Special Operations pack, and the Girl Genki Vehicle pack. With every weapon, every vehicle, and every outfit ever created for Saints Row: The Third, players will go over the top, off the reservation, and to places where no decent game should go.

Zoom 1m 3m 1y All
Track product
GOG.COM CD KEY : You need to register on Gog.com, then use the GOG Key to download and activate your game to play Saints Row the Third Full Package.
EU STEAM CD KEY: Requires an EUROPEAN IP address or you must activate it with a VPN (Virtual Private Network) in order to play Saints Row the Third Full Package. Might have languages restrictions or language packs. Read the description on the store game page to know if the EU IP is only needed for activation or for playing also (maybe on EU Servers). Most of the stores offer you their help, or show you how to do this with a tutorial to follow.
GERMAN STEAM KEY : CD Key Steam for Germany. Usually requires German IP address to download and play Saints Row the Third Full Package with German Language only. The content might be different from other steam version due to content restrictions in Germany Austria and other countries. Read the store carefully about activation steps, languages and restrictions.
STEAM GIFT : A Steam gift is a one-time transfer you receive. You activate and install Saints Row the Third Full Package to play on Steam, it is a non-refundable game that stays in your Steam games collection. Please read the store description about any language or region restrictions.
STEAM CD KEY : Use the Steam Key Code on Steam Platform to download and play Saints Row the Third Full Package. You must login to your Steam Account or create one for free. Download the (Steam Client HERE). Then once you login, click Add a Game (located in the bottom Left corner) -> Activate a Product on Steam. There type in your CD Key and the game will be activated and added to your Steam account game library.
Bundle
Franchise Pack
Standard Edition
Ultimate Franchise Pack
Compare Choose & Buy Download (772)

It’s the best saints row game for me, just fun and wtf, like gta, but better.