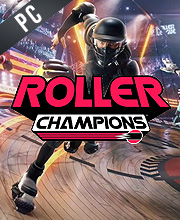 What is Roller Champions CD key?

It's a digital key that allows you to download Roller Champions directly to PC from the official Platforms.

How can I find the best prices for Roller Champions CD keys?

Allkeyshop.com compares the cheapest prices of Roller Champions on the digital downloads market to find the best sales and discount codes on trusted stores.

Roller Champions is a sports video game that is developed by Ubisoft Montreal and published by Ubisoft.

Skate your way to the championship! Start from the streets and keep winning matches until you reach the stadium and eventually victory!

Offering a 3v3 competitive multiplayer sports game where two teams of three will compete to earn five points in seven minutes. The game is played in a third-person perspective where players should throw a ball into a goal to earn points for your team. You must pass the ball to your teammates for them to finish the subsequent laps. Your opponents will try to tackle and knock you over, but those kinds of attacks can be dodged.

Winning matches will help players gain followers and eventually lead them to compete in matches that would have larger crowds.

Players are able to fully customize their character, outfits, and gears in the game with the use of cosmetics.