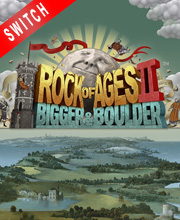 It's a digital key that allows you to download Rock of Ages 2 Bigger & Boulder directly to Nintendo Switch directly from Nintendo eShop.

How can I find the best prices for Rock of Ages 2 Bigger & Boulder on Nintendo Switch ?

Much like its predecessor, the game comes in two parts. The first part is a tower defense game. The second part involves you carefully meandering your own boulder through all the traps the enemy has set down in part one, before hurtling yourself at the enemy gates.

Rock of Ages 2: Bigger & Boulder is an ingenious mixture of madness that is punctuated with highly entertaining animated sequences. The striking visual style that ACE Team is known for is distinct with just an acceptable amount of amateurishness keep it hilarious and memorable. Whether it’s going up against another human or the AI, everyone should always throw rock.

Zoom 1m 3m 1y All
Track product
NINTENDO CODE : This is a digital code for Rock of Ages 2 Bigger & Boulder. Use the download code on the Nintendo eShop of your Console. Once connected to the Nintendo eShop, you can enter and redeem the Download Code. Read carefully the store description about any language and region restrictions.
Standard Edition
Compare Choose & Buy Download (759)