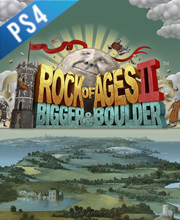 It's a digital key that allows you to download Rock of Ages 2 Bigger & Boulder directly to Playstation 4 from PSN (Playstation network).

I think Rock of Ages 2: Bigger and Boulder is pretty fantastic, and well-worth playing. I was genuinely surprised that a sequel was even made, but I’m happy to see that ACE Team managed to recapture all of the magic from the first, and expand on it even more.

I love ACE Team, and I love what the team suggests about the future of South American game development as it continues to grow. Quirky and creative, and so very funny, Rock of Ages 2 is unlike many “comedy” games in that it backs the humour up with quality gameplay, very worthy of respect.