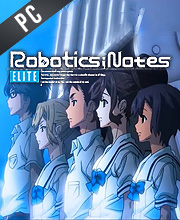 It's a digital key that allows you to download Robotics Notes Elite directly to PC from the official Platforms.

How can I find the best prices for Robotics Notes Elite CD keys?

Allkeyshop.com compares the cheapest prices of Robotics Notes Elite on the digital downloads market to find the best sales and discount codes on trusted stores.

Robotics Notes Elite is an adventure video game that is developed by Mages Inc. and published by Spike Churnsoft Co., Ltd.

On an island named Tanegashima, the Central Tanegashima High’s Robot Research Club is about to be disbanded. There are only two members in the club, the first one is Kaito Yashio who would just rather play robot fighting games all day long despite the predicament that they are in. The other one is Akiho Senomiya, the club leader who is working hard to keep the club going. She believes that when she is able to complete their giant robot then their club would be saved.

One faithful day, Kaito stumbled upon a mysterious A.R. annotation called the “Kimijima Report”. It contains some sensitive material like instructions as well as locations across the island. The game has a lot of branching storylines which can result in different endings.

You are the only hope of the Robot Club in order to fulfill the dream of creating the giant robot -Gunvarrel!

Zoom 1m 3m 1y All
Track product
STEAM CD KEY : Use the Steam Key Code on Steam Platform to download and play Robotics Notes Elite. You must login to your Steam Account or create one for free. Download the (Steam Client HERE). Then once you login, click Add a Game (located in the bottom Left corner) -> Activate a Product on Steam. There type in your CD Key and the game will be activated and added to your Steam account game library.
Standard Edition
Compare Choose & Buy Download (772)