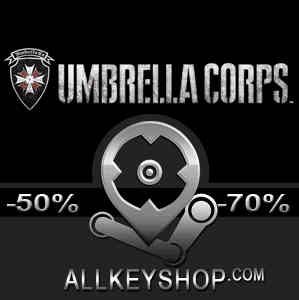 It's a digital key that allows you to download Resident Evil Umbrella Corps directly to PC from the official Platforms.

How can I find the best prices for Resident Evil Umbrella Corps CD keys?

Allkeyshop.com compares the cheapest prices of Resident Evil Umbrella Corps on the digital downloads market to find the best sales and discount codes on trusted stores.

The game is set 2 years after the events that followed Resident Evil 6 and it has been 12 years since the fall of the Umbrella Corporation.

Even though the Umbrella Corporation has fallen, it still keeps a lot of valuable information. This information include the secrets of Umbrella Corp and most importantly the bio weapons technology. Other corporations are desperate to get a hold of these and are sending mercenaries to get it.

You will play as a mercenary in the game and choose from two different corporations. You would have to work with your fellow mercenaries and kill all hostile players. Your weapon range would include semi-automatic rifles, pistols, explosives, shotguns and grenades.

Special features of the game include an “analog cover” where you can easily find objects that you can use as a hiding place with a blue color. Another useful and new item would be the “Zombie Jammers” which will make you invisible to zombies, however your enemy could have a “Jammer Buster” and this will nullify the effects of the zombie jammer and expose you to them.

This is definitely a different take from the usual Resident Evil that we have grown accustomed to, but it looks like it will be a very interesting challenge. Are you up for it?

Zoom 1m 3m 1y All
Track product
EU STEAM CD KEY: Requires an EUROPEAN IP address or you must activate it with a VPN (Virtual Private Network) in order to play Resident Evil Umbrella Corps. Might have languages restrictions or language packs. Read the description on the store game page to know if the EU IP is only needed for activation or for playing also (maybe on EU Servers). Most of the stores offer you their help, or show you how to do this with a tutorial to follow.
STEAM GIFT : A Steam gift is a one-time transfer you receive. You activate and install Resident Evil Umbrella Corps to play on Steam, it is a non-refundable game that stays in your Steam games collection. Please read the store description about any language or region restrictions.
STEAM CD KEY : Use the Steam Key Code on Steam Platform to download and play Resident Evil Umbrella Corps. You must login to your Steam Account or create one for free. Download the (Steam Client HERE). Then once you login, click Add a Game (located in the bottom Left corner) -> Activate a Product on Steam. There type in your CD Key and the game will be activated and added to your Steam account game library.
Bonus Edition
Deluxe Edition
Standard Edition
Compare Choose & Buy Download (759)

Gamesdeal clearly the best site to buy this one :O