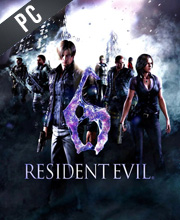 What is Resident Evil 6 CD key?

It's a digital key that allows you to download Resident Evil 6 directly to PC from the official Platforms.

How can I find the best prices for Resident Evil 6 CD keys?

Allkeyshop.com compares the cheapest prices of Resident Evil 6 on the digital downloads market to find the best sales and discount codes on trusted stores.

Resident Evil 6 (also known as Biohazard 6) is an action–adventure third-person shooter game developed and published by Capcom. It is the ninth installment in the Resident Evil series.

The game’s story is told from perspectives of four characters: Chris Redfield – former member and founder of BSAA; Leon Kennedy – Raccoon City survivor and US government agent; Jake Muller – Albert Wesker’s illegitimate son and Sherry Birkin’s associate; and lastly, Ada Wong – freelance agent framed by Neo-Umbrella for the bio-terrorist attacks. Together, they will face a new horror, the highly virulent C-virus, as well as confront the force behind a massive bio-terrorist attack that threats not only one city, but also the entire world.

Take on the challenge in Resident Evil 6 in either solo, or in two-player co-op gameplay. Face new threats including zombies, J’avo, Chrysalids, and much more. Want to see how it is to be one of the evil ones? Take on the action from the other side and be the hunter – hunt them as a zombie, or a J’avo and eliminate human characters! You can also unlock seven additional stages in the game by gaining achievements.

It’s sheer horror and adrenaline rush all packed in one amazing game. Resident Evil 6 is definitely one you have to get your hands on.