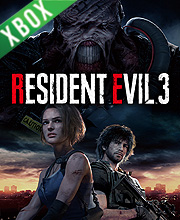 What is RESIDENT EVIL 3 Game Code?

It's a digital key that allows you to download RESIDENT EVIL 3 directly to Xbox One from Xbox Live.

How can I find the best prices for RESIDENT EVIL 3 on Xbox one?

Allkeyshop.com compares the cheapest prices of RESIDENT EVIL 3 on the digital downloads market to find the best sales and discount codes on trusted stores.

Resident Evil 3 is a remake of 1999s Resident Evil 3: Nemesis. The events are set at the same time as Resident Evil 2 and players get to control Jill Valentine a former S.T.A.R.S. Officer. This is the peak of the zombie apocalypse because of the T-Virus, and Jill is attempting to escape Raccoon City. She also has to get away from Nemesis who is an intelligent bioweapon that is out to kill all the S.T.A.R.S. members.

All in all, Resident Evil 3 goes on to prove that the traditional Resident Evil formula, only souped-up to meet today’s needs, works better than, excuse me for saying this out loud, the first-person flatness that was introduced in Resident Evil 7 or brainless shooting action of super-overvalued Resident Evil 4 that took the illustrious series entirely in the wrong direction, only to be redeemed by these excellent remakes.

After an explosive start, Resident Evil 3 on Xbox One quickly falls into a familiar rhythm. Having a Tyrant hunt you down is now the new norm for Resident Evil, but the most feared of all will always be Nemesis. He quickly disappears into the cutscenes however, without as much of an impact as you would perhaps hope. Thankfully though, there are enough environment and enemy variations crammed into this short experience that you never get a chance to settle down and acquaint yourself with any one enemy type, and as a survival horror game that is exactly how you want to feel.

Resident Evil 3 All In-game Rewards Unlock lets players instantly unlock the Nightmare and Inferno difficulty modes; all models; all concept art; and all the shops and items that you will get your hands on in the game.

Fantastic re-imagining of a classic that dives deeper into the lore and shines a light on some of the more glossed over aspects of the Raccoon City outbreak. The story and character development is top-notch, and while the game feels short, it is largely due to the fact that the story is moving 100mph from the jump, not altogether unlike Jill’s first escape from RC. Tons of surprises await both newcomers and veterans alike, and there is plenty of incentive here to encourage replay-ability following the first play through through various weapons and two additional difficulties available after beating the game on Hardcore (which is really only a slightly tougher Standard in all honesty). Lastly, the soundtrack is absolutely incredible. Every piece of music in this game has you feeling immersed and engaged with the trials and tribulations of Jill and Carlos as they make their way through the City of the Dead. Truly, it is a fitting final jaunt through RC.

Damn I really loved the saga when I was younger, and now we can play it again with modern graphics. This one and the 2 are a yes or yes for thoose resident evil fans

I played a RE2 remake, and it was more than great! now i’m looking to take the time to buy a RE3 remaster too, and to play it and enjoy every detail of the game. Really good job CAPCOM!