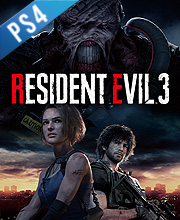 What is RESIDENT EVIL 3 Game Code?

It's a digital key that allows you to download RESIDENT EVIL 3 directly to Playstation 4 from PSN (Playstation network).

Allkeyshop.com compares the cheapest prices of RESIDENT EVIL 3 on the digital downloads market to find the best sales and discount codes on trusted stores.

Resident Evil 3 is a remake of 1999s Resident Evil 3: Nemesis. The events are set at the same time as Resident Evil 2 and players get to control Jill Valentine a former S.T.A.R.S. Officer. This is the peak of the zombie apocalypse because of the T-Virus, and Jill is attempting to escape Raccoon City. She also has to get away from Nemesis who is an intelligent bioweapon that is out to kill all the S.T.A.R.S. members.

Resident Evil 3 proves that Resident Evil 2 wasn’t just a one-off success of a remake and shows that Capcom has a winning formula on its hands.

Resident Evil 3 is a very, very fine example of what it wants to be, and anyone who loved the Resident Evil 2 remake should be won over all over again with this one.

Resident Evil 3 All In-game Rewards Unlock lets players instantly unlock the Nightmare and Inferno difficulty modes; all models; all concept art; and all the shops and items that you will get your hands on in the game.

PLAYSTATION ACCOUNT : You will receive a Playstation account to download and play RESIDENT EVIL 3 PS4. Once downloaded you can play with your own account. Follow the instructions given by the seller and read carefully the store description about any language and region restrictions.
EUROPEAN BOX GAME : This is an European version for RESIDENT EVIL 3 PS4 in Box Edition (DVD-CD ROM). This is not a downloadable product. Please read the sellers page for any additional costs (taxes, shipping), delivery time for your country and languages available.
PLAYSTATION CODE : This a Playstation Game Code to download RESIDENT EVIL 3 PS4. Activate the code on the Playstation Network. Read carefully the store description about any language and region restrictions.
PLAYSTATION NETWORK USA : PSN Code for USA ONLY. You need an US PSN Account to add USD in your Virtual Wallet. Login to your Playstation Account, use the PSN Card Code (12 digit code) to add funds in PSN Wallet in your country currency USD / Dollar US / $ only. To add money on Playstation Network wallet you need the following components and services:
* PS4 / PS3 / PSP / PSVITA Console
* A broadband internet connection
* US Playstation Account
* A free Playstation Wallet
You can follow the store description on how to add currency on the PSN Account for more informations.
Standard Edition

No one will regret playing Resident Evil 3 for five hours, but the scariest thing is that they reduced the biggest fear in the game to scripted escape scenes