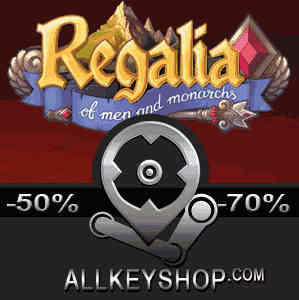 What is Regalia Of Men and Monarchs CD key?

It's a digital key that allows you to download Regalia Of Men and Monarchs directly to PC from the official Platforms.

How can I find the best prices for Regalia Of Men and Monarchs CD keys?

Allkeyshop.com compares the cheapest prices of Regalia Of Men and Monarchs on the digital downloads market to find the best sales and discount codes on trusted stores.

Regalia: Of Men and Monarchs is a strategy, role-playing video game developed by Pixelated Milk and published by Klabater.

Who knew that you will actually inherit one whole kingdom? In Regalia of Men and Monarchs, you actually will. But the thing is, the kingdom is far away and it is actually drowning in debt. Of course, you would have to bring this kingdom to glory and pay of its debt.

Offering tough turn-based battles that offer different regions all with different adventures and enemies. Meet all 20+ characters that you can actually recruit to your team.

As a newly appointed king, you must know about town management, diplomacy, and expeditions. Giving you about 30 hours of gameplay as well as a great replayable factor.

Enjoy the light-hearted story that the game offers as well as the great orchestral soundtrack.

Will you be able to bring the kingdom of Ascalia out of debt and make it a great kingdom? Or would you watch it further crumble into nothing?

GOG.COM CD KEY : You need to register on Gog.com, then use the GOG Key to download and activate your game to play Regalia Of Men and Monarchs.
EU STEAM CD KEY: Requires an EUROPEAN IP address or you must activate it with a VPN (Virtual Private Network) in order to play Regalia Of Men and Monarchs. Might have languages restrictions or language packs. Read the description on the store game page to know if the EU IP is only needed for activation or for playing also (maybe on EU Servers). Most of the stores offer you their help, or show you how to do this with a tutorial to follow.
STEAM GIFT : A Steam gift is a one-time transfer you receive. You activate and install Regalia Of Men and Monarchs to play on Steam, it is a non-refundable game that stays in your Steam games collection. Please read the store description about any language or region restrictions.
STEAM CD KEY : Use the Steam Key Code on Steam Platform to download and play Regalia Of Men and Monarchs. You must login to your Steam Account or create one for free. Download the (Steam Client HERE). Then once you login, click Add a Game (located in the bottom Left corner) -> Activate a Product on Steam. There type in your CD Key and the game will be activated and added to your Steam account game library.
Royal Edition
Standard Edition

so much fun and game on this website, can’t wait to win overwatch game today

This looks like a great funny combat role-playing game. This animation game isn’t expensive, so i would buy it.