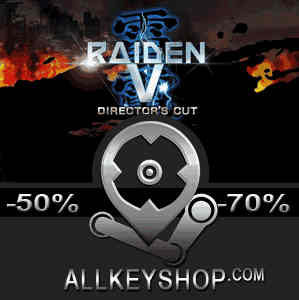 It's a digital key that allows you to download Raiden 5 Director's Cut directly to PC from the official Platforms.

How can I find the best prices for Raiden 5 Director's Cut CD keys?

Allkeyshop.com compares the cheapest prices of Raiden 5 Director's Cut on the digital downloads market to find the best sales and discount codes on trusted stores.

The Arcade hit from 25 years ago is now available for PC and it is now modern and advanced. The game is dubbed easy to learn and hard to master.

Featuring three distinct ships to choose from, every single one with different defense, mobility, and sub-weapons. Play the game with either one or two players offline. Some improvements include health bars for the damage system of ships, instead of the previous lives. A new “Cheer Attack” has also been introduced which boosts your ship’s sub-weapons for a short time only. Voice acting has also been added to the game.

Choose from the three different game modes available: Story Mode, Boss Mission, and Gallery. The Story Mode offers a story with twists and turns that alters depending on your game progress. The Boss Missions allow you to fight with bosses under special conditions and push to be on top of the leaderboard. The gallery is where players can get to see characters, concept and game art of Raiden V: Director’s Cut.

GOG.COM CD KEY : You need to register on Gog.com, then use the GOG Key to download and activate your game to play Raiden 5 Directors Cut.
STEAM CD KEY : Use the Steam Key Code on Steam Platform to download and play Raiden 5 Directors Cut. You must login to your Steam Account or create one for free. Download the (Steam Client HERE). Then once you login, click Add a Game (located in the bottom Left corner) -> Activate a Product on Steam. There type in your CD Key and the game will be activated and added to your Steam account game library.
Standard Edition

Hello guys,
I love this game so much
Raiden 5 Director’s Cut is awesome game