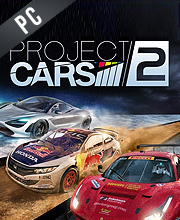 What is Project Cars 2 CD key?

It's a digital key that allows you to download Project Cars 2 directly to PC from the official Platforms.

How can I find the best prices for Project Cars 2 CD keys?

Allkeyshop.com compares the cheapest prices of Project Cars 2 on the digital downloads market to find the best sales and discount codes on trusted stores.

Get behind the wheels of some of the fastest cars ever to be driven on pavement.

Serious racing for serious racers. Extraordinarily convincing at each of the disciplines on offer.

After a shaky start, the continued hard work of Simply Mad Studios to iron out the bugs and improve Project Cars 2 has paid off with a top-flight racing sim.

Project Cars 2 improves upon its predecessor for a racing game of unprecedented scope – unfortunately hampered by a series of small issues.

The Deluxe Edition bundles the base game with the Season Pass which includes 4 DLC packs and 1 bonus car pack.

Find all the best prices for Project Cars 2 DLCs on Allkeyshop!

With the release of Project CARS in 2015, Gran Turismo and Forza Motorsport finally got the competition. Unlike these blockbusters, Project CARS had a big advantage insofar as it was a multiplatform game that we could play on consoles and on computers. But not everything was fabulous. The most common objections to the game went to the driving model, poor AI of the driver and a very modest choice of cars.
All of this was to be fixed by a sequel that was announced just a month after the first game came out. Such a decision of the developers infuriated one, surprised the other, but now that Project CARS 2 is in front of us, we can't condemn the move of the slightly crazy Slightly Mad Studios because the game has progressed against its predecessor in all possible segments.

This is visible from the first moment you start the game. The interface is nicer, smoother and simpler, and that simplicity is transferred to the power feed settings for steering wheels and controllers. There are no more piles of sliders from the first Project CARS, where they spent many days getting the feeling that suits them best, and that too would fall into the water as soon as they took the second class car. In a pair, there are several sliders that you can configure along with text that explains what each slider is doing. That’s a great thing on paper, but the simplification I’m talking about has to be fully justified on the driving model on all vehicles, both on the controller and on the steering wheel. Fortunately, the thing works perfectly. Once you’ve sorted out the settings, you won’t have to go back to them anymore, whether you’re driving a rally, a GT3 racer, a road car, or an LMP car.

I really like this nice game! played it alot on the PS4

That’s a nice deal, my cousin has a racing simulator so it’s a good option to try this one