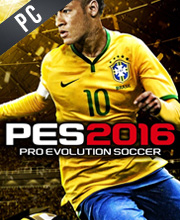 It's a digital key that allows you to download Pro Evolution Soccer 2016 directly to PC from the official Platforms.

How can I find the best prices for Pro Evolution Soccer 2016 CD keys?

Allkeyshop.com compares the cheapest prices of Pro Evolution Soccer 2016 on the digital downloads market to find the best sales and discount codes on trusted stores.

It’s a new era for Pro Evolution Soccer, and the game for this year is looking great!

Besides the improved gameplay, they also improved the overall atmosphere of the game. The menu has been renovated and is now more simple and effective in use. And you can now save your preferences played in terms of modes and ensures that you immediately have access to it.

The game has a huge range of competitions, stadiums and cups. The Master League mode is where the players can control a team of the user’s selection. While playing the default players, the aim is to use these players and gain points by winning matches, cups and leagues. Use acquired points to purchase additional players to join the team. Customize your team, win matches and be the best team in the world.

Bonus: Pro Evolution Soccer 2016 + Bonus CD Key Steam (PRE-ORDER) (Can be different or change over time for each seller. Please refer to the seller’s website)

Zoom 1m 3m 1y All
Track product
ASIAN BOX GAME : This is an Asian import of Pro Evolution Soccer 2016 in Box Edition (DVD-CD ROM). This is not a downloadable product. Please read the sellers page for any additional costs (taxes, shipping), delivery time for your country and languages available.
EU STEAM CD KEY: Requires an EUROPEAN IP address or you must activate it with a VPN (Virtual Private Network) in order to play Pro Evolution Soccer 2016. Might have languages restrictions or language packs. Read the description on the store game page to know if the EU IP is only needed for activation or for playing also (maybe on EU Servers). Most of the stores offer you their help, or show you how to do this with a tutorial to follow.
STEAM CD KEY : Use the Steam Key Code on Steam Platform to download and play Pro Evolution Soccer 2016. You must login to your Steam Account or create one for free. Download the (Steam Client HERE). Then once you login, click Add a Game (located in the bottom Left corner) -> Activate a Product on Steam. There type in your CD Key and the game will be activated and added to your Steam account game library.
STEAM KEY ROW : It means for Rest Of the World countries which are not concerned by the region restrictions. This product can't be purchased and activated in Several countries. Please read the store description to know the full list of countries which are concerned. Use the key to Download and play Pro Evolution Soccer 2016 on Steam.
Bonus Edition
Bundle
Dayone Edition
Standard Edition
Compare Choose & Buy Download (803)

Even if its is 2 years old, this game still rocks! Good game!

Nice game, with good gameplay online is not the best…

Pro Evolution Soccer 2016 it’s cool game …
i love this game really … and i play this game evryday
thank you .

OMG …. the prices
What a surprize !
Thank you guys