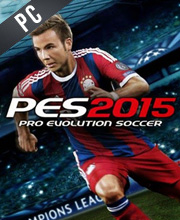 It's a digital key that allows you to download Pro Evolution Soccer 2015 directly to PC from the official Platforms.

How can I find the best prices for Pro Evolution Soccer 2015 CD keys?

Allkeyshop.com compares the cheapest prices of Pro Evolution Soccer 2015 on the digital downloads market to find the best sales and discount codes on trusted stores.

The game features a satisfying gameplay that focuses on fast controls, highly developed AI, a complete new range of players’ dribbling skills, and more defensive combinations for your team.

With the power of the FOX engine, this game’s level of accuracy has skyrocketed expectations by bringing a vast number of unqiue animations, playing styles, crowd movements, and reactions. Each team’s styles and abilities are also recreated from their real-life counterparts, bringing a more realistic gameplay!

Don’t miss everything that PES 2015 has to offer! Grab your copy now!

Zoom 1m 3m 1y All
Track product
EU STEAM CD KEY: Requires an EUROPEAN IP address or you must activate it with a VPN (Virtual Private Network) in order to play Pro Evolution Soccer 2015. Might have languages restrictions or language packs. Read the description on the store game page to know if the EU IP is only needed for activation or for playing also (maybe on EU Servers). Most of the stores offer you their help, or show you how to do this with a tutorial to follow.
STEAM CD KEY : Use the Steam Key Code on Steam Platform to download and play Pro Evolution Soccer 2015. You must login to your Steam Account or create one for free. Download the (Steam Client HERE). Then once you login, click Add a Game (located in the bottom Left corner) -> Activate a Product on Steam. There type in your CD Key and the game will be activated and added to your Steam account game library.
Preorder
Standard Edition
Compare Choose & Buy Download (772)

I have checked and i dont see any offer wrong, thanks for the report.

My favorite sports game. Exellent game and it’s no so expansive and pes is great to play vs your friends. 🙂

Great game with an excellent improvement in gameplay and graphic