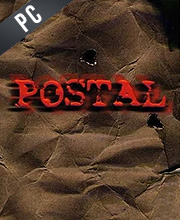 What is Postal CD key?

It's a digital key that allows you to download Postal directly to PC from the official Platforms.

How can I find the best prices for Postal CD keys?

Allkeyshop.com compares the cheapest prices of Postal on the digital downloads market to find the best sales and discount codes on trusted stores.

Postal is a survival horror third-person action shooter game developed and published by Running With Scissors.

You will play as The Postal Dude in a game without any plots and background stories; just purely psychotic hunger for killing people. You will be armed with several weapons in the game, all of them can be placed in eight weapon slots, and each of them having a fixed amount of maximum ammo. Your default weapon is a weak machine gun, but you’ll get unlimited ammo in return.

Your main objective is not to stay alive, but rather kill a certain percentage of armed NPCs (non-playable characters) which are indicated on the map. You will be able to go to the next level as long as you reach the required number of kills even if you die in the process. Postal has 21 levels of fast-paced, gun-blazing killing spree to complete.

Violence has found its new name.

GOG.COM CD KEY : You need to register on Gog.com, then use the GOG Key to download and activate your game to play Postal.
STEAM CD KEY : Use the Steam Key Code on Steam Platform to download and play Postal. You must login to your Steam Account or create one for free. Download the (Steam Client HERE). Then once you login, click Add a Game (located in the bottom Left corner) -> Activate a Product on Steam. There type in your CD Key and the game will be activated and added to your Steam account game library.
Bundle
Standard Edition