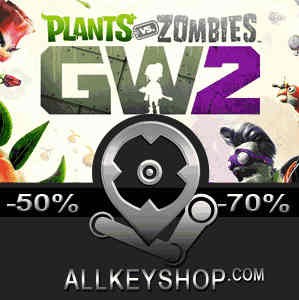 What is Plants vs Zombies Garden Warfare 2 CD key?

It's a digital key that allows you to download Plants vs Zombies Garden Warfare 2 directly to PC from the official Platforms.

How can I find the best prices for Plants vs Zombies Garden Warfare 2 CD keys?

Allkeyshop.com compares the cheapest prices of Plants vs Zombies Garden Warfare 2 on the digital downloads market to find the best sales and discount codes on trusted stores.

Plants vs Zombies Garden Warfare 2, developed by PopCap Games and published by Electronic Arts, is a video game shooter in the third person and a Tower Defense, blending action and strategy.

This is the sequel to the popular game Plants vs Zombies Garden Warfare in which plants and zombies fight for the control of the garden. This new episode contains all the elements of its predecessor, adding significant improvements. First, the number of fighters classes is now of 14 for each camp, with the addition of 6 new classes.

Each fighter has 3 abilities scalable and specific weapons. Nearly a hundred different characters are playable. This wide range offers hours of fun and the possibility to vary your playing experience. For those who have already played the first part, it is also possible to retrieve the characters that have been unlocked.

The biggest improvement is the possibility to play in single player mode where you have to complete quests (to earn more experience points) for improve your character, while the first part only allowed to play multiplayer online. This solo mode allows you to become familiar with the characters and their abilities, playing without internet connection.

Of course, the multiplayer has not been forgotten and it was also the subject of many innovations. No less than 12 new maps will be your hunting ground where up to 24 players can compete in competition mode and 4-player in cooperative mode. A dozen game modes are available including classic modes (Elimination, Elimination by team) and new modes (Herbal Assault, Flag of Power).

Another impressive improvement is the spectacular efforts that have been made in terms of graphics, now more cared for, detailed and colorful. The interface has also been improved with animations in three dimensions. Finally, Electronic Arts has announced the release of several downloadable content, to enrich the game for the delight of the players.

With his immense qualities, Plants vs Zombies Garden Warfare 2 is expecting a worldwide success and surpass the record of 8 million players claimed by Electronic Arts for the first episode.

What are you waiting to join the hordes of players who already compete in this awesome game?

Be the first one to write a review about Plants vs Zombies Garden Warfare 2 !

Plants vs zombies garden warfare 2 is a very fun shooting game, its like plants and zombies fight with guns and special abilities. i recommend everyone to buy it.

A really fun farming game that doesn’t take too long to grow stuff and has NO microtransactions!

There also is a tower defense mini-game.

Great price at CDKeys.com – remember the facebook fan 5% discount to bring it down even further.

CDKEYS.COM best price to buy the game…i also write this cuz i had to