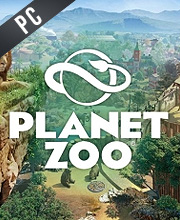 What is Planet Zoo CD key?

It's a digital key that allows you to download Planet Zoo directly to PC from the official Platforms.

How can I find the best prices for Planet Zoo CD keys?

Allkeyshop.com compares the cheapest prices of Planet Zoo on the digital downloads market to find the best sales and discount codes on trusted stores.

Planet Zoo is the ultimate zoo simulation where you get to build habitats, manage your zoo and add animals. The animals in the game are authentic which means that they can think, feel, and explore the habitat that you create for them.

The thing with Planet Zoo is that it is so charming and appealing that the fun parts outweigh the frustrating ones. It’s not a perfect game in the genre, but it is one of the best ones you can play right now.

Nearly flawless, Planet Zoo is a masterpiece of tycoon simulation, and is one of the most relaxing, engaging, and fantastical pieces of entertainment of 2019.

The Deluxe Edition includes the Exclusive Beta Access for the game plus three unique animals:

Planet Zoo: Australia brings animals from the land down under to your zoo. The animals included are the Koala, Dingo, Red Kangaroo, Southern Cassowary, and Eastern Blue-Tongued Lizard. This also comes with 230 modern and recycled construction pieces.

Planet Zoo: South America Pack comes with more than 250 scenery pieces that are diverse to South America. This also comes with five unique animals which are the Jaguar, Llama, Capuchin Monkey, Giant Anteater, and the Red-Eyed Tree Frog.

Planet Zoo is a very good game and arguably the best zoo-sim on the market. We really haven't had a game like this in years, and in that fact lies a little satisfaction that such a thing exists. However, I can’t say I had crazy fun with Planet Zoo. Maybe my approach to the game was wrong and expectations missed, but the result is ultimately such that I had to force myself to play, which is not a good sign otherwise. Planet Zoo is an extremely detailed and deep game in which building a zoo never goes by fencing the space, buying an animal, tidying up its residence and letting people observe it. I mean, that’s the basis of the idea, but before fencing the space one should count on the type and height of the fence and the level of visibility of the animal residence. Some fences you have to put protection against climbing, sometimes you have to put one-way glass so that the animals do not feel too exposed, and so on. And that's just for fencing. Furthermore, you must pay attention to the population of animals, their needs for space for playing, feeding and privacy, the need for vegetation of the appropriate type, the right temperature of the habitat, etc. Then care should be taken that visitors leave a tip next to the exhibition space, and for that they must be informed, so panels and speakers should be prepared for each type of animal for information. This is the basis of the basics - later follow veterinary research, work on repopulation of fauna, construction of quarantine for diseased animals, equipping the zoo with necessary facilities for guests, releasing animals into the wild… Planet Zoo I plan to give another chance, but the required level of micromanagement does not give me hope that my attitude will change. I am convinced that this game can be enjoyed, when you know exactly where that enjoyment lies. Some will really like having to take care of the smallest aspects in running a zoo, and some will cry out for simpler solutions because they just want to take care of their anteaters. Planet Zoo is a quality game anyway, but it’s not everyone’s notion of fun.

So a very attractive game of deep mechanics and realistic scenarios opet and yet it didn’t sit well with me. I plan to give Planet Zoou another chance, but the required level of micromanagement does not give me hope that my attitude will change. I am convinced that this game can be enjoyed, when you know exactly where that enjoyment lies. Some will really like having to take care of the smallest aspects in running a zoo, and some will cry out for simpler solutions because they just want to take care of their anteaters. Planet Zoo is a quality game anyway, but it’s not everyone’s notion of fun.

The best part of Planet Zoo are the animals themselves, but from the amount of micromanagement it sometimes seems that these animals are even the smallest part of the game

Zoo Simulator? Yes please trow it at me i will have it anywhere and anytime

The environments are really well done, it looks a nice game, and the price is low, I recommend the purchase.

I hope it’s a good simulator. Waiting for the price to go down a bit.

What a nice graphic, i want to try it! Really realistic animals. Love it!