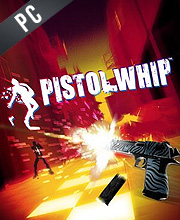 What is Pistol Whip CD key?

It's a digital key that allows you to download Pistol Whip directly to PC from the official Platforms.

How can I find the best prices for Pistol Whip CD keys?

Allkeyshop.com compares the cheapest prices of Pistol Whip on the digital downloads market to find the best sales and discount codes on trusted stores.

Shoot to the rhythm in Pistol Whip a rhythm game like no other inspired by movies like “John Wick” and “Equilibrium”, pistol whip masterfully combines the movements of a rhythm game and the explosiveness of first-person shooting. Enjoy gameplay from the game’s original 10 tracks, 8 update tracks, and 5 campaign levels from 2089 bringing the tracklist to 23 in total.

Pistol Whip’s multiple difficulties and modifiers like Deadeye and Dual-wield add depth to a game that’s more addictive and satisfying than Beat Saber. This is neither fully a shooter nor completely a rhythm game yet it ticks off both boxes and does so exceptionally quickly in a stylish package.

Pistol Whip is a music/action VR shooter built from recognizable elements that combine into a unique whole, and when it all comes together as planned it leaves the player feeling like an invincible gun-god dancing through the bullets.

Pistol Whip deserves to be discussed alongside Beat Saber, which I think is still virtual reality’s best and most fun ambassador. The two are both rhythm games that engross you in the music as you fight your way through a series of moving obstacles.

Zoom 1m 3m 1y All
Track product
EU STEAM CD KEY: Requires an EUROPEAN IP address or you must activate it with a VPN (Virtual Private Network) in order to play Pistol Whip. Might have languages restrictions or language packs. Read the description on the store game page to know if the EU IP is only needed for activation or for playing also (maybe on EU Servers). Most of the stores offer you their help, or show you how to do this with a tutorial to follow.
EUROPEAN STEAM GIFT : It’s a steam gift for Europe which requires an European IP address to activate and to play Pistol Whip on Steam. Read carefully the store description about region and language restrictions.
STEAM CD KEY : Use the Steam Key Code on Steam Platform to download and play Pistol Whip. You must login to your Steam Account or create one for free. Download the (Steam Client HERE). Then once you login, click Add a Game (located in the bottom Left corner) -> Activate a Product on Steam. There type in your CD Key and the game will be activated and added to your Steam account game library.
Bundle
Standard Edition
Compare Choose & Buy Download (759)