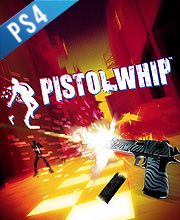 What is Pistol Whip Game Code?

It's a digital key that allows you to download Pistol Whip directly to Playstation 4 from PSN (Playstation network).

Allkeyshop.com compares the cheapest prices of Pistol Whip on the digital downloads market to find the best sales and discount codes on trusted stores.

Shoot to the rhythm in Pistol Whip a rhythm game like no other inspired by movies like “John Wick” and “Equilibrium”, pistol whip masterfully combines the movements of a rhythm game and the explosiveness of first-person shooting. Enjoy gameplay from the game’s original 10 tracks, 8 update tracks, and 5 campaign levels from 2089 bringing the tracklist to 23 in total.

Pistol Whip is a triumph of game design. Rather than trying to wedge a bunch of mechanics onto a platform that doesn’t welcome them, Pistol Whip instead focuses on what makes VR fun – color, sound, and motion. This is a game that connects players with the developers’ intentions through its simple interface, leaving the player sweaty, inspired, and triumphant. Masterpieces come in all forms – and Pistol Whip qualifies.

Altogether, Pistol Whip is likely to be the PlayStation VR game of the year. It’s simple concept works incredibly well and has few faults. If you’ve ever wanted to be John Wick, or any other badass gun-wielding gangster for that matter, this is the game for you. Modifiers and multiple difficulties extend the life of the game even further, although this may not be enough for some. Once free content updates and extra DLC tracks arrive, though, there’ll be plenty of content to enjoy.