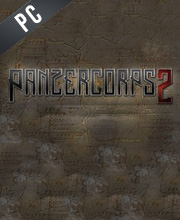 What is Panzer Corps 2 CD key?

It's a digital key that allows you to download Panzer Corps 2 directly to PC from the official Platforms.

How can I find the best prices for Panzer Corps 2 CD keys?

Allkeyshop.com compares the cheapest prices of Panzer Corps 2 on the digital downloads market to find the best sales and discount codes on trusted stores.

Panzer Corps 2 is a strategy video game that is developed by Flashback Games and published by Slitherine Ltd.

This could most possibly be the ultimate Second World War strategy game ever as the game has a time-proven formula that has been refined to the latest standards.

Get to play every major power in the European theater of the Second World War. Choose from over 1000 unique units that are modeled and animated to be the most authentic World War II units in a game.

A massive branching campaign is available with around 60 scenarios. There are also 10 additional single-player scenarios and 10 more scenarios for the multiplayer experience. Players are also able to enjoy the random map generator for the skirmish mode having six distinct map types as well as four mission types.

Different types of multiplayer or options are available for players to enjoy like the hot seat, server-assisted play-by-emails mode and more.

EPIC GAMES KEY : Region Free / Worldwide. Requires Epic Games Launcher App in order to play the game. You need to create a free account here in order to download Panzer Corps 2 from Epic Plateform . Read the description on the store page about any language or country restrictions.
GOG.COM CD KEY : You need to register on Gog.com, then use the GOG Key to download and activate your game to play Panzer Corps 2.
EU STEAM CD KEY: Requires an EUROPEAN IP address or you must activate it with a VPN (Virtual Private Network) in order to play Panzer Corps 2. Might have languages restrictions or language packs. Read the description on the store game page to know if the EU IP is only needed for activation or for playing also (maybe on EU Servers). Most of the stores offer you their help, or show you how to do this with a tutorial to follow.
EUROPEAN STEAM GIFT : It’s a steam gift for Europe which requires an European IP address to activate and to play Panzer Corps 2 on Steam. Read carefully the store description about region and language restrictions.
STEAM GIFT : A Steam gift is a one-time transfer you receive. You activate and install Panzer Corps 2 to play on Steam, it is a non-refundable game that stays in your Steam games collection. Please read the store description about any language or region restrictions.
STEAM CD KEY : Use the Steam Key Code on Steam Platform to download and play Panzer Corps 2. You must login to your Steam Account or create one for free. Download the (Steam Client HERE). Then once you login, click Add a Game (located in the bottom Left corner) -> Activate a Product on Steam. There type in your CD Key and the game will be activated and added to your Steam account game library.
STEAM KEY ROW : It means for Rest Of the World countries which are not concerned by the region restrictions. This product can't be purchased and activated in Several countries. Please read the store description to know the full list of countries which are concerned. Use the key to Download and play Panzer Corps 2 on Steam.
Bundle
Complete Edition
Field Marshal Edition
General Edition
Standard Edition

It has all you need for a turn based game, but its the time period is where it is special

It doesn’t look bad, really worth giving it a try!

It is good. Not one of the best tank games, but it’s nice. If you could take it cheaper, it would be great.

quite good, enjoyable at some times. Worth to play if on sale omg yes

Not too bad. Was interested but the comments made me not get it