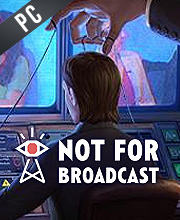 What is Not For Broadcast CD key?

It's a digital key that allows you to download Not For Broadcast directly to PC from the official Platforms.

How can I find the best prices for Not For Broadcast CD keys?

Allkeyshop.com compares the cheapest prices of Not For Broadcast on the digital downloads market to find the best sales and discount codes on trusted stores.

Set in an alternate 1980s, your job was just to clean the studio when some twist of fate, you become the director of what can be shown on air. The feed is live, so you must make sure that there won’t be any dead air. Choose the news headlines, the ads, what to censor and so much more.

I enjoyed my time in Not For Broadcast as it was something completely different for me. As recently I have been spending most of my time on FPS titles. The only thing for me is that it sometimes felt a bit repetitive which left me bored on occasion.

This game has to be seen to be believed. The devs have taken a brilliantly clever look at the story-driven genre. Great acting and comic scripts make you really want to see what is happening next.

This edition comes with the game plus the Not for Broadcast Original Soundtrack.

Not For Broadcast Original Soundtrack

Not For Broadcast Original Soundtrack comes with 30 tracks of the game’s original music composed for the game exclusively.

Zoom 1m 3m 1y All
Track product
GOG.COM CD KEY : You need to register on Gog.com, then use the GOG Key to download and activate your game to play Not For Broadcast.
EU STEAM CD KEY: Requires an EUROPEAN IP address or you must activate it with a VPN (Virtual Private Network) in order to play Not For Broadcast. Might have languages restrictions or language packs. Read the description on the store game page to know if the EU IP is only needed for activation or for playing also (maybe on EU Servers). Most of the stores offer you their help, or show you how to do this with a tutorial to follow.
EUROPEAN STEAM GIFT : It’s a steam gift for Europe which requires an European IP address to activate and to play Not For Broadcast on Steam. Read carefully the store description about region and language restrictions.
STEAM GIFT : A Steam gift is a one-time transfer you receive. You activate and install Not For Broadcast to play on Steam, it is a non-refundable game that stays in your Steam games collection. Please read the store description about any language or region restrictions.
STEAM CD KEY : Use the Steam Key Code on Steam Platform to download and play Not For Broadcast. You must login to your Steam Account or create one for free. Download the (Steam Client HERE). Then once you login, click Add a Game (located in the bottom Left corner) -> Activate a Product on Steam. There type in your CD Key and the game will be activated and added to your Steam account game library.
STEAM KEY ROW : It means for Rest Of the World countries which are not concerned by the region restrictions. This product can't be purchased and activated in Several countries. Please read the store description to know the full list of countries which are concerned. Use the key to Download and play Not For Broadcast on Steam.
Early Access
Standard Edition
Supporter Bundle
Compare Choose & Buy Download (772)