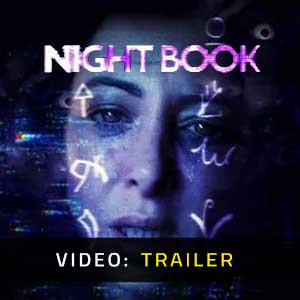 What is Night Book CD key?

It's a digital key that allows you to download Night Book directly to PC from the official Platforms.

How can I find the best prices for Night Book CD keys?

Allkeyshop.com compares the cheapest prices of Night Book on the digital downloads market to find the best sales and discount codes on trusted stores.

Night Book is an interactive FMV game developed by the prolific Wales Interactive famous for their other FMV games such as late shift, five dates, the complex, etc. The story follows a translator named Loralyn as she struggles to keep her family together amidst her pregnancy, part-time job, and taking care of her mentally ill father at home. She eventually finds a job translating for a mother and son, it is here where she encounters the strange occult book that alters the course of her life forever.

Night Book is a good example of the kind of modern FMV game that Wales Interactive produces. It brings together an interesting story with some strong performances and a topical site of anxiety. At a run time of about 45 minutes for each playthrough, this is perfect for a quick play with a glass of wine but may not feel like the best value.

It’ll take you less than an hour to finish one playthrough of Night Book, and the premise is engaging enough that I wanted to see where it was going, however, this isn’t a scary game, something anyone wanting to play Night Book will be disappointed to hear. There’s a streamer option to pause at choices in the options menu, which means content creators could get more fun out of this with their audiences than I did alone in my room at night with zero scares.

This Edition gives you The Ultimate FMV Bundle 2, four games from Wales Interactive.

Zoom 1m 3m 1y All
Track product
EUROPEAN STEAM GIFT : It’s a steam gift for Europe which requires an European IP address to activate and to play Night Book on Steam. Read carefully the store description about region and language restrictions.
STEAM GIFT : A Steam gift is a one-time transfer you receive. You activate and install Night Book to play on Steam, it is a non-refundable game that stays in your Steam games collection. Please read the store description about any language or region restrictions.
STEAM CD KEY : Use the Steam Key Code on Steam Platform to download and play Night Book. You must login to your Steam Account or create one for free. Download the (Steam Client HERE). Then once you login, click Add a Game (located in the bottom Left corner) -> Activate a Product on Steam. There type in your CD Key and the game will be activated and added to your Steam account game library.
European PC Win 10 / Xbox Key. Digital code for EUROPE which allows you to play on both Xbox and Windows 10 PC in EUROPE. See below for more informations.
Standard Edition
Compare Choose & Buy Download (772)